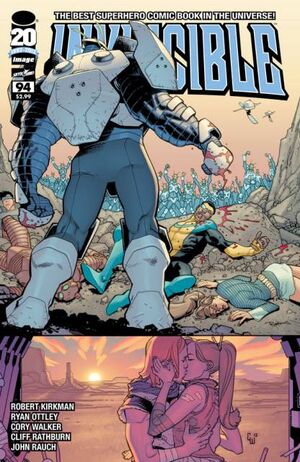 Eve heads to the Pentagon to help in the London invasion. Mark sees the new and gets angry when he can’t help them. Bolt reports to Rex, but the Capes, Inc cannot go since they are fighting Magmamanties. Wolf-Man gets a call and his Wolf C.O.R.P.S are fighting Thrill-Kill, Construct, and Eruptor. Zack cannot respond as he sees an attractive alien, much to Rex’s confusion.

After the Guardians of the Globe have been knocked down, Zandale rushes in by is grabbed by their leader. Rex sends his drone to fights and goes inside a construct to personally fight. He speaks to their leader in Flaxan, showing that he has mastered the Flaxan language. He tells him that he knows how to disrupt the electrical currents into his armor. He tells him that he has lived in the Flaxan world longer than he has Earth. He also says that he worked to decidate them to a way of peace.

Flashing back to the Flaxan dimension, Rex attempts to negotiate an alliance with Flaxan rebels. The rebel leader corrects him by stating that the Zaxal Royal Family are tyrannical people. He states that he is Flaxan and he will stand with him, much to Amanda and Rex’s relief. Amanda and Rex fight the Zaxals through various locations with the assistances of Zaxal slaves. Amanda talks about how his belt is working, much to Rex’s happiness.

Amanda tells Rex that she wishes to go to Earth and Rex goes on to say that it has only been months they’ve been in Earth time. He also goes on to say that she should learn the language. She argues that she has tried, but she is unable to since she’s tried for three hundred years. Rex apologizes, stating that it took him decades to master the Flaxan language. Rex says that if anyone was to come to the mission, he would have preferred it to be Amanda. They prepare to have an intimate moment, but he is called off to fight.

Presently, Brit is recovering from his injury while Outrun is out. Zandale destroys a Flaxan airship and the debris off a building fall down. A woman screams and citizens are under the debris. However, a swift flying Kregg surprisingly save the citizens.

The Flaxan Emperor attacks Rex, sending him launching into debris. Zandale goes to Brit and tells Zandale to help evacuate the wounded. Zandale starts with Pegasus and Shapesmith. He goes to Outrun next, but she insist she’s fine. Next, he grabs Yeti while Best Tiger holds them off. Rex goes to Amanda’s unconscious and tells her that he still loves her.

Flashing back, Amanda goes to visit Rex watches over their soliders. Amanda tells Rex’s how much she has missed her. Amanda kisses him and begins to remove one another’s clothes. They duo become intimate and have sex on the mountain. Centuries later, the duo would make a turn in the Flaxan war.

The duo would win the war and allow the enslaved races to return back to their home dimensions. Rex goes on to say that he fell deeper in love with her when she showed compassion for all, even the enemy. This would cause concern for him later.

The emperor attempts to attack Rex and Amanda, but Amanda wakes up and crunches the Emperor’s weapons. She smacks his mask away and reveals to Rex that the blast paralyzed, stating that she heard what he said. The emperor reveals himself to be able to speak English and has a similar appearance to Amanda in her Monster form. He asks if she is surprised to her son, much to the duo’s shock.

Retrieved from "https://imagecomics.fandom.com/wiki/Invincible_Vol_1_94?oldid=62739"
Community content is available under CC-BY-SA unless otherwise noted.