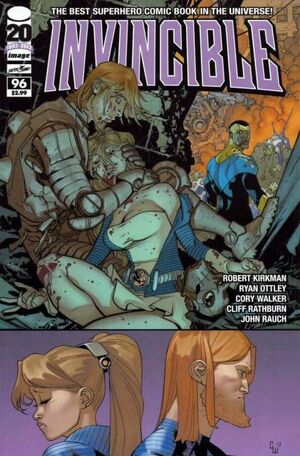 So it's true... she somehow... procreated with one of them. I can't even... how could she... it doesn't matter. If you know where they are, I want you to hunt them down, all of them. I want their bloodline erased. All Zaxal royals are to be gathered and executed. Women, children...of them. Including the the unborn half-breed that grows within that traitorous Zaxal belly.

Flashing back to the Flaxan dimension, Amanda continues crying, apologizing for betraying Rex. Rex says nothing and walks away in sorrow. The next day, Rex tells Amanda that he has chosen a successor and says that he wants to go home, since all Zaxals have lost supporters and all that remains are painful memories.

Rex tells Amanda to lie to Guardians of the Globe to say that they were only there for twelve years and Rex is called by a subordinate. The duo return to the Pentagon, much to the surprise of Brit, Donald, and Cecil. Rex takes command and tells Zandale, Le Brusier, and Pegasus to take care of air support.

He tells Kaboomerang and Outrun to help evacuate citizens. He gives Yeti and Black Samson the task of guarding the safe zones with the injured citizens. He tasks the Actioneers, Kid Thor, Knockout, Japandroid, Best Tiger to fight off the remaining troops. Amanda would fight their leader, who’s name is revealed to be Monax. Amanda attempts to restrain Monax and Rex fires a bolt of lightning into him.

Monax punches Amanda, refusing to give up. Monax says that his empire will win, but Rex tells him to look around. He shows that they have lost. Monax refuses to believe it and says that Rex will pay for his crimes. Amanda punches his head, knocking him unconscious. Amanda apologizes to him and asks that they take him away. Rex tells Brit that she’s his father, much to Brit’s confusion.

Zandale goes back to his home with bruises and broken arm. He thinks of how he will lie to his parents on his secret identity and his participation in London. Carla acts as if he doesn’t know what’s going on and he realizes that his parents are still there. The duo see him, confused on why he was injured.

Meanwhile at the Grayson Home, Mark becomes angry with Allen and Oliver about not helping in the London Invasion. Allen argues that he isn’t a hero on Earth and they were visiting Zack while he was invited by a female alien. Mark apologizes for snapping at them and Allen tells him that now they now leaving for Talescria since he isn’t in Viltrumite custody. Oliver asks Allen to leave so he can talk to Mark alone.

Oliver apologizes for infecting him and begins to cry, showing his first sign of human emotion. Oliver realizes his mistake and Mark accepts his apology. The duo leave and head to Talescria. Eve arrives back home after he went to London to see Monax be transported to prison. She asks Mark if he wants to “fool around.” Mark agrees thought he says it doesn’t feel the same without his powers.

Meanwhile, Thragg reprimands Kregg for inteferring with the Flaxan invasion, though stating that he was one of their most loyal agents. Kregg apologizes to him and says that he couldn’t let the people die. He also reveals that a woman in London is pregnant with his child. Thragg tells him that he has over a dozen women, citing that woman is of “limited importance.” Kregg reveals to Thragg that he knows and loves all the woman he’s impregnanted, much to his digust.

After sleeping together, Mark argues that without his powers, his sensitivity has gone up. Eve tells him to relax and says not everyone “hits a home run.” Mark tells her to stop complaining about one another. Mark believes that his lost powers are temporary and Eve is confused. Mark asks her to check on Dinosaurus. Dinosaurus is working a large device.

Meanwhile at the Pentagon, Amanda visits Monax and attempts to recouncile with him. She tells him that she didn’t know her monster form can produce a child. Monax refuses to speak and tells her to leave. Afterwards, Rex tells her that he doesn’t want to be alone again. He also tells her that he let power corrupt him and the duo kiss one another, symbolizing that they are back together.

Flashing back when Rex was called by a Flaxan loyal to him in the Flaxan dimension, He finds out that Amanda’s sexual encounter with Zaxal resulted in Monax. He tells his successor in anger to execute all Zaxals including women and children as well as Zall’s unborn fetus.

Retrieved from "https://imagecomics.fandom.com/wiki/Invincible_Vol_1_96?oldid=62737"
Community content is available under CC-BY-SA unless otherwise noted.