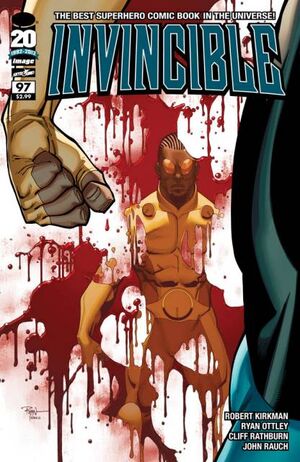 Don't say that. I loved Tyrone. I would have never--He did this to me, he caused this--all of it! He was...evil

Zandale arrives home and his parents demand to know why he’s injured, stating that Tyrone was on TV. Zandale decides to finally tell them the truth, revealing Zandale’s origin. Zandale tells his parents about how his twin brother, Tyrone, was more favored by them than he was. Zandale would be interested in art while Tyrone would be into science. Tyrone would graduate college early while Zandale live a fast life with women and art.

However, Tyrone was disintegrated and killed in the process. Expecting no one to believe him, Zandale decided to pretend to be Tyrone seeing that his parents favored him over Zandale. He would learn to use his powers a few years later and soon starting to fight crime. He would fight Vault and help the new Green Ghost. He would tell his parents that Tyrone was Bulletproof so that they would believe the reason why he couldn’t see them often. Sometime during that, he would meet Carla. He would learn the difference about how they felt about Zandale and Tyrone. The double life would have a toll on him.

Mr. Randolph refuses to believe everything he said, believing Zandale to have killed Tyrone. Zandale begins to cry as they refuses to believe him. Harriet begins to cry at the thought of it. Carla leaves in anger and Zandale tells the duo that Tyrone was evil. A sad Harriet tells Zandale that he was jealous of Tyrone and threatens to call the police on him. Carla smashes her head with a frying pan, causing her eyeball to pop out and head to gash open.

Mister Randolph sees the carnage and Zandale panics. Carla panics and cries after what she had done. He becomes angry while crying and attacks Carla. He pummels her and attempts to kill her. Zandale goes to stop his father, but his super strength accidentally snaps his neck, killing him. He panics and comes up with a plan. In order to cover up what happened, Zandale puts the duo in their car and drops over a hill to make it seem like they died by accident. The duo would attend his deceased parents' funeral and Brit would apologize for his loss. Cecil, Donald, and other family and friends would attend their funeral. Carla and Zandale looked at each other in grief upon what they did.

Meanwhile at Comic Con, Filip Schaff talks to Mark similar to the pitch of Robert Kirkman. Filip talks about how he getting things ready for the 100th issue of Science Dog and how working on an independent comic give him more creative freedom. Mark asks if it works. After a long pause, he says not really. Filip argues that he sold a lot and Mark argues there were too many covers for it. Filip tells the next fan to come up. Eve puts him in transmutation block and takes him home. Eve argues that he would have acted differently if he was Invincible, much to Mark’s frustration. Meanwhile, an angry and imprisoned Nolan tells Allen he will kill him if his son is dead. Allen apologizes after seeing the error in his ways and releases Nolan from his cell. He has Nolan go back home and see Debbie. He tells her that he has see the error in his ways. Oliver comes behind him sad and asks Debbie to forgive him.

Nolan says that he is proud of his sons for standing up for what they believe in. Allen talks about how he doesn’t trust the Viltrumites and he asks Nolan to go to Earth. Nolan accepts and Debbie goes with him. Debbie is worried about Oliver and Nolan asks her not to worry, citing that he is an adult now. The duo head into their quarters since he was in prison for a long time.

Meanwhile, Eve transmutates Mark’s clothes off and the duo prepare to be intimate. While the duo are experiencing much power, Mark’s powers resurface, much to his happiness.

Retrieved from "https://imagecomics.fandom.com/wiki/Invincible_Vol_1_97?oldid=67422"
Community content is available under CC-BY-SA unless otherwise noted.