"The Death Of Everyone, Part One" 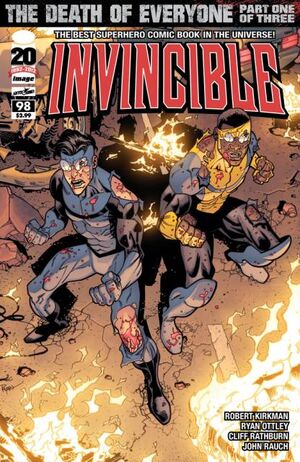 Oh, God... You're killing everyone.

Appearing in "The Death Of Everyone, Part One"

The Death of Everyone: Part Two of Three

Mark and Zandale meet up and Mark tells him to keep his old Invincible costume. Mark dons the blue and black costume he got before. He flies off to see Dinosaurus and asks him what’s been going on. Dinosaurus tells him that the climate is changing and millions must die so that billions can survive. An angry Mark grabs Dinosaurus and he directs him to Los Angeles.

Mark rushes to Los Angeles and Dinosaurus apologizes, stating he is sorry that it has come to this. Meanwhile, Angstrom Levy demands to be released from his captivity get revenge on Mark. The duo send a shock through his head. Angstrom argues that has worked tirelessly to help their world, adding to its population. The Technicians decide to release him since they have no use for him.

Mark calls Cecil to get the Guardians of the Globe to help with disarming the bomb there. An angry Cecil says that this incident will be on Mark. Mark finds one and Cecil sends the Guardians there. Ms. Popper teleports Rex’s drone to the location. Rex reveals to Mark that Dinosaurus’s new Vegas was a large Hydrogen bomb and Mark finds another one. Brit, Yeti, and Shapesmith arrive. Brit suggest that they send a scientist to deactivate the bombs, but Rex uncovers that it is a device that causes earthquakes.

A building collapses on Yeti, Brit, and Shapesmith. The trio attempt to save as many civilians as they can. Rex tells the team to destroy the devices to stop the signals. Mark and Outrun destroy them. Mark sees Dinosaurus arrive through a teleporter and charges towards him. Dinosaurus asks why Mark is trying to save the life of a few rather than billions. Mark calls him “insane” and Dinosaurus states he knows he doesn’t believe that. Zandale, Japandroid and Kaboomerang manage to get a few survivors out. Dinosaurus reveals to Mark that Los Angeles was just a distraction. Several bombs go off in Greenland, causing a large tsunami wave. Mark grabs Dinosaurus and sees the wave flood major cities including Los Angeles, New York City, Paris, Dubai, Tokyo, Sydney, and London, much to Mark’s anger.

Retrieved from "https://imagecomics.fandom.com/wiki/Invincible_Vol_1_98?oldid=68603"
Community content is available under CC-BY-SA unless otherwise noted.