"The Death Of Everyone, Part Two" 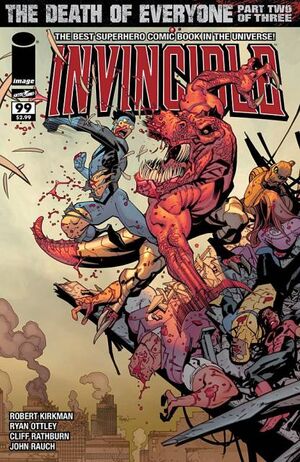 It would appear we've attracted a spectator. No matter... the world should see this. It will warn others who oppose me-- you see... ...since you've proven, Invincible, that you can't stay out of my way... I'm afraid I have no choice-- it's time for you to die!

Appearing in "The Death Of Everyone, Part Two"

The Death of Everyone: Part Two Of Three

Mark looks in horror of what has happened and Dinosaurus argues it’s for the better. Meanwhile, Rex tells the Guardians of the Globe and the various other teams to evacuate the cilivans in the other major cities. Rex reports to Cecil about what’s happening. Mark tells Dinosaurus how he’s a mass murderer and he had made Mark an accomplice. Dinosaurus attempts to rationalize with Mark, but he refuses to listen. Dinosaurus argues that he said some good came out of Las Vega’s destruction. Dinosaurus launches him and asks what he’s trying to accomplish, stating that he cannot beat him in a physical fight. He goes on to say that he doesn’t it for glory, but rather because he cares.

Meanwhile, Thragg has all the Viltrumites meet on their warship and give them a speech. Thragg tells them that they are to interbreed with humans and announce their takeover of the planet, stating to remain in hiding. Thragg warns the group that they are not to interfere with the events that are going on Earth or they will face his wrath, much to Kregg’s dismay.

Meanwhile, Bolt talks with Rex’s drone as they help evacuate New York and Jersey into teleporters. Rex reveals that he has all the people removed and out of the streets. Bolt argues it's not enough and that the people are evacuated, but they can't be displaced for long.

Rex says that he will continue to track Mark's battle with Dinosaurus and says that they are still in Los Angeles Mark kicks Dinosaurus off of him and tells him that he was foolish to trust him. He goes on to say that for the sake of humanity, he has to die. Dinosaurus argues that if he’s going to interfere, he must die instead. The building they are under collapses and Dinosaurus holds Mark’s defeated body. Dinosaurus prepares to crush his head and says that he has no choice but kill him.

Retrieved from "https://imagecomics.fandom.com/wiki/Invincible_Vol_1_99?oldid=62734"
Community content is available under CC-BY-SA unless otherwise noted.