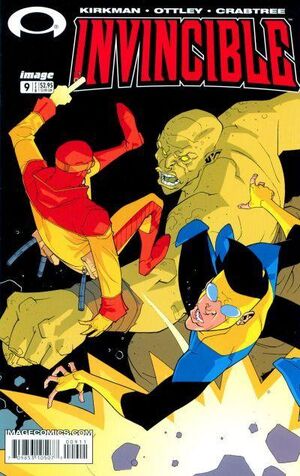 With that out of the way, I'd like to announce our line up for the New Guardians of the Globe. Dupli-Kate. Shrinking Ray. Monster Girl. Black Samson. Rex Splode...as long as he promises to behave.

In space, a crew that bares a resemblance to the Star Trek ship crew is about to vaporize by a star. Allen offers his assistance to move it away from there. The crew thanks him, and he shocks them with his telepathic powers. Allen then sets his course for Earth. Meanwhile at Mark’s house, William and a few friends leave after celebrating Mark’s 18th birthday. Afterwards, Mark and Nolan watch a zombie movie while Debbie smiles, watching father and son bond together.

At the Pentagon, Robot is invited to be leader of the new Guardians of the Globe by Cecil Stedman. He reveals that the new Guardians is now funded by the government and Donald Ferguson will be their liason. Nolan goes to a quiet mountain, practicing on how he will tell Mark the truth about his origin. He becomes frustrated and flies away. Eve apologizes for not coming to Mark’s party. Mark reveals that all they did was watch horror movies and Eve revealed that she liked horror, much to Mark’s surprise. Next, they go patrolling. Meanwhile, Debbie calls Art about mistakenly shrinking Mark’s costume. Art recommends Ionic cleansing.

Mark and Eve fight off the Lizard League while they attempt to poison the water supply. Eve adds density to the surrounding air and defeats them. They stand around for the Lizard League to be transported to prison and Robot arrives. He asks that the duo come to try out for the Guardians of the Globe. Mark refuses, but says he will see others tryout. Eve leaves, angry. Mark walks through and sees Rex, only recognizing his presence. Robot asks that Mark not let his incident with Eve change his opinion of him. Rex shows his ability and brags to someone about it. He then gets on one knee and talks what he believes is a child.

Curious, Rex teases her and asks her what her name is. She reveals to be none other than Monster Girl. Rex teases her again and she reveals her transformation powers. She pummels him until Mark comes in and attacks her. She reverts back to human form and apologizes. Rex attempts to thank Mark, but Mark refuses to speak to him. Robot then decides on Dupli-Kate, Monster Girl, Black Samson, Shrinking Ray, and Rex Splode. Robot offers him a chance to join, but Mark politely refuses. That night, Mark has dinner with Debbie and reveals that Amber will be studying with him. A concerned Debbie asks what they will doing, with Mark saying that she is just a friend. Eve flies to Mark window and looks disappointed seeing Mark kissing Amber, deciding to fly home. Meanwhile, The Mauler Twins revive a decapitated Immortal by reattaching his head to his neck. The twins attempt to enslave him by putting a control beacon in his neck. The Immortal’s willpower overrides the beacon and he flies out, much to their annoyance.

Retrieved from "https://imagecomics.fandom.com/wiki/Invincible_Vol_1_9?oldid=62960"
Community content is available under CC-BY-SA unless otherwise noted.