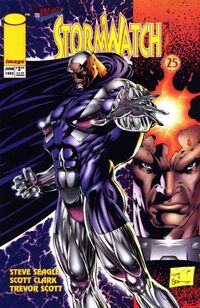 Isaiah King is the name of a former superhero who was a member of Team One:StormWatch.

This team was formed during the 1960s, when Isaiah was a reluctant participant in a secret government program that involved forming the first team of super-powered peacekeeping operatives. Isaiah, simply codenamed King, was the team's telepath due to his fledgling ability to read thoughts. During this time, he was a struggling husband and future father of Jackson King and Malcolm King. His tenure of service in Team One was cut violently short during an ill-fated mission involving a coupe between the human crime lord Slaughterhouse Smith and Lord Helspont in their attempt to destroy major American cities in their attempt to collect money for their future nefarious plots. Most of the Team One operatives were killed, not including King per se, as his fate was virtually left unexplained at the conclusion of the crisis[1].

Isaiah King was exposed to the radiation of a special comet that passed close to Earth. Many who were exposed to this comet became superhuman and were known as "Comet Enhanciles" or "Seedlings". Isaiah and his team were on a satellite the moment the comet passed, were closer to it as a result, and therefore became stronger than any other comet-enhanciles. Isaiah's children, Jackson and Malcolm inherited his powers. The process slowly drove Isaiah and his team mad though and he took the name Despot with his team becoming the WarGuard. As Despot, a clear change occurred including his telepathic powers becoming incredibly stronger than during his Team One days, as well as an overall physical change where he took on immense size, wearing a purple and silver costume, shaven head with a partial metal attachments on his face and truly wicked demeanor, showing great contempt for human life. After he and his team were captured, Jackson King and his brother Malcolm would strive to be better men than what their father had become.

Prelude to the Future

Due to a trip through time, orchestrated by the traveler Timespan[2][3], Jackson King learned that his father Despot would become the world's next threat after his release from cryogenic suspension. Upon seeing the horrors that Despot would commit, Jackson was determined to avert the disasters that would befall Stormwatch and the world. He attempted to kill his father while he and his Warguard team remained in suspension, however did not have the will to kill his own father "in cold blood"[4].

Because of this, Despot and his Warguard would live on to be released later by U.N. order, to intervene during the Wildstorm crisis, to subdue Lord Helspont. Despot refused the task and led his freed Warguard away from Skywatch after killing the security team led by his former friend Lincoln "Link" Adams. Despot spared Adams, only so he could relay his message of warning to the U.N. and anyone else to not encroach on the freedom of the Warguard[5].

After the Wildstorm crisis was resolved, StormWatch pursued Despot and the Warguard. Under the new leadership of Spartan[6], StormWatch tracked Despot and his group on the lunar U.N. Base. Despot staged an ambush on StormWatch and reclaimed his remaining son, turning him to his side[7]. Strafe attacked Synergy, who came along with the team, thus resulting in Diva assuming command. She went on fight Despot, attempting to allow enough time for Winter to lead the rest of the team to safety. Despot easily killed Diva before being confronted by Spartan who successfully protected the StormWatch team long enough to return to their shuttle[8].

StormWatch convened with Synergy, reviewing a last-ditch effort to defeat Despot: luring him aboard Skywatch and sending the space station crashing into the Death Valley desert on Earth. The plan was partly successful as Despot and his Warguard did board the station, only to find a deserted station except for Hellstrike who volunteered to remain behind to initiate the crash sequence. Despot quickly dispatched Hellstrike, later discovering the trap set for him. The station plummeted to Earth, but did not kill Despot of his followers. Despot's team went on to battle the surviving StormWatch members, including trading blows with Battalion (Jackson King), who was inserted into that timeline by Timespan[9]. However, Despot felled both sides, sparing only his son as he went on to explain his quest to free the world from its "burden" of free will. Battalion tried to reach out to his father but was spurned by his father's belief that his son was wishing for something that could never be and that he was "wishing" his life away. After his son's disappearance, Despot went on question Timespan who explained that everything would happen as it was meant to be. Infuriated by the riddles of Timespan and what he thought was Timespan holding a grudge against his son, Despot swore vengeance on him before going on to kill everyone on the planet Earth with his mind. Eventually, with the help of a more "enlightened" Battalion, Despot was defeated and Stormwatch did not suffer the tragic fate it had suffered in the previous timeline.