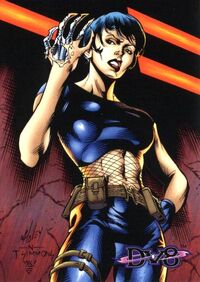 Ivana Baiul is the name of a comic book character from Wildstorm. She has starred in Gen¹³ and DV8.

Ivana Baiul was the head of Sci-Tech, the scientific division of I.O. There she worked on creating a group of genetically enhanced soldiers for the government, a task previously done 12 times with almost all failures. Determined to do it right, Ivana targeted the children of Gen 12, the last group of genetically manipulated soldiers, believing they would be pre-conditioned to handle the process better.

Her first recruits, dubbed Bliss and Threshold, were taken after Ivana's men killed their parents. Similar techniques were used to gather the rest, many of whom were put into suspended animation, for later use. However some of her targets escaped, aided by John Lynch, and formed the group Gen¹³ for mutual protection. The members of Gen¹³ later broke into Ivana's base, forcing Ivana to flee with some of her creations, Bliss and Threshold included.

Ivana went to New York, where she awoke her frozen troops, now dubbed DV8, in preparation for a coming confrontation with Gen¹³. In the meantime she got her kicks by indulging her curiosity as to how her psychologically scarred operatives would interact with the real world.

After many missions with DV8 outside of government sanction, she was able to blackmail her way back into I.O., gaining the post of the Executive Director. She remained in that position until the combination of fallout from the Divine Right incident and DV8's rebellion forced her out of her position. Two years later, she would turn up in charge of Civil Defense Administration, an organization created as a de-facto replacement of I.O. Following the Authority's takeover of United States, she wound up in the Project Entry universe.

After Worldstorm, Ivana was working for the US government in some capacity once again. In light of the apparent reboot of Gen¹³, her current status, as well the precise details of her history have become uncertain.