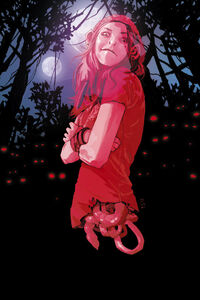 One of the Horrors of the planet Cleave, Izabel is a ghost of a young girl who died by stepping on a landmine. Her parents were resistance fights who didn't believe in supporting the war.

Izabel offered help to Alana when Marko was mortally wounded by The Stalk.[1] She informs Alana that once you die on Cleave, you become a ghost and are stuck there unless they bond with someone else born on the planet. She offered Alana a shortcut to snow which was a key ingredient needed to save Markos' life in exchange for letting her to become bonded with Hazel. Reaching a point in the road where she couldn't move forward and seeing that Izabel was trying to help, Alana finally acquiesced to Izabel's request and let her bond with Hazel.[2]

Finally arriving at Rocketship Forest, Alana and Marko were shown a wooden ship by Izabel that had been hidden by her people with their illusions. She informed them they would need to sacrifice something important to leave. Marko smashed his sword which had been a family heirloom for years. As they took off in the shop, they were suddenly boarded by Marko's parents, Barr and Klara. Marko's parents thought he was in trouble since his sword was broken and banished Izabel to a nearby planet in the scuffle. Marko quickly showed them that he had married Alana and had their child Hazel together. Realizing he needed to rescue Izabel, he took one of their Crash Helms and went to the planet with his mom to save her.[3]

When Izabel found Klara and Marko being attacked by locals, she used her Illusion Casting to scare their attackers off. Together they teleported back to the ship right as the planet came to life as a Timesuck.[4]

They escaped to Quietus where they held up at D. Oswald Heist's house for a week. When their location was discovered by Prince Robot IV and Gwendolyn, they retreated again to Gardenia.[5]

On the peaceful planet, Izabel continued to take care of Hazel. She found it harder to keep up and was shocked when Hazel was able to climb in and out of her cage.[6] When they were suddenly attacked by Dengo, an insane poor Robot Kingdom member, Izabel attempted to scare him off with her illusions but learned that the Robots were immune to her tricks.[7]

After Hazel and Klara were taken by the Royal Guard they were sold off to a detention center run by the Landfall Coalition. When Klara and Hazel arrived for a cleansing and debrief before being introduced into general population, a doctor stuck up for them, which was strange for a landfall troop to stick up for a 'wing'. However, once they were alone, the doctor transformed to reveal it was Izabel and she was going to attempt to help them. However, years went by and on Hazel's fourth birthday she was still on the planet still hiding her identity from everyone. Eventually, she had enough and Hazel revealed her wings to her school teacher, Noreen.[8]

Retrieved from "https://imagecomics.fandom.com/wiki/Izabel_(Saga)?oldid=60198"
Community content is available under CC-BY-SA unless otherwise noted.