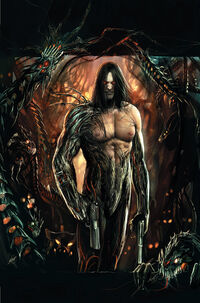 Jackie joined the mob at a very early age, after being adopted by a mafia don named Frankie "Kill the Children too" Franchetti. He was picked up at the orphanage after Frankie was prompted by a mysterious stranger named Sonatine, who told Frankie that having Jackie around would bring him tremendous power. Frankie had previously employed Jackie's father and knew what a vicious person he was so he hoped to mold Jackie into a more fine tuned instrument of destruction.

Jackie came to the mafia life easily, losing his virginity to a female police officer during an interrogation at the age of 14. He grew up, or more accurately matured, very quickly, and soon and enjoyed the life of sex and violence. However, when he turned 21, his dark powers awakened, and he learned of his evil inheritance. At first, this power was a blessing, allowing his job as a professional hitman to run more smoothly and work in more unique ways. However, with this power came many enemies. Early on, Jackie spent much of his time escaping from or fighting the Angelus (who wants to kill him), and Sonatine and his Brotherhood of The Darkness (who wish to capture him and steal his powers). Eventually, Jackie chose to quit the mob, but found it easier said than done. Jackie had turned on his adoptive father and mafia don, Frankie Frenchetti, to get a clean slate and exit from his life of crime after a meeting with Batman (Batman/Darkness crossover).

However, after Jackie's "uncle" Frankie kidnapped Jenny, a childhood friend of Jackie's, Frankie Franchetti killed her and sent a videotape to Estacado in revenge. Jackie could not take this and called out Franchetti's mob, leading them to an abandoned warehouse covered in gasoline. When the crew arrived to kill Estacado, Jackie threw down his lighter and blew the place, and all its occupants, to bits [Darkness (vol. 1) #40]. Jackie spent an undetermined amount of time afterward wandering around hell, searching for Jenny, until Tom Judge came and gave him hope (a gift that allows men to exit hell) [Universe #3]. Jackie's body was then reconstructed by the Darkness, which managed to hide away in a tooth cavity [Darkness (vol. 2) #1].

Jackie returned to find the Franchetti mob taken over by Frankie's cousin, Paulie. Paulie was able to discover Jackie's secret as well as a long-lost sister of Jenny's. Using this information, Paulie blackmailed Jackie into doing hits for him. Along the way, Jackie learned how to construct a gun out of The Darkness. Later, Jackie discovered a hitman following Jenny's sister, killed him, and took his revenge on Paulie as well. This led to Jackie taking control of the Franchetti family. Since taking control of the Franchetti family, Jackie has vastly expanded his mafia, taken on the Triads, and fought the Russian Mafia in Atlantic City.

Over the course of the series, Jackie makes uneasy alliances with Sara Pezzini and both versions of The Magdalena.

Other Appearances of Jackie Estacado

Jackie Estacado has appeared in crossover storylines involving Painkiller Jane, The Hulk, Batman, and Superman, Aliens, Predator, Witchblade Wiki, Wolverine, and Tomb Raider. These are non-canonical for the crossover heroes, but at least the Batman crossover is canonical for The Darkness, as the events in this crossover are later referred to and have repercussions in The Darkness comic. Possible reference to The Darkness may be found in the story of 2006 movie The Covenant. Jackie also makes a cameo appearance in Invincible Vol 1 60 along with other Image Comics characters

The writer and editor, Ann Nocenti, claims that she was hired to write a treatment and first issue for the comic, but was never paid or credited for her published work. [1]

Retrieved from "https://imagecomics.fandom.com/wiki/Jackie_Estacado_(Top_Cow)?oldid=63387"
Community content is available under CC-BY-SA unless otherwise noted.