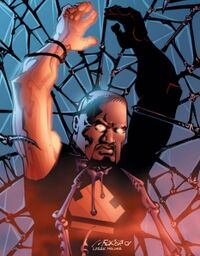 Jackson King was the son of Isaiah King, a former member of Team One. Isaiah King was exposed to the radiation of a special comet that passed close to Earth. Many who were exposed to this comet became superhuman and were known as "Comet Enhanciles" or "Seedlings". Isaiah and his team were on a satellite the moment the comet passed, were closer to it as a result, and therefore became stronger than any other comet-enhanciles. Isaiah's children, Jackson and Malcolm inherited his powers. The process slowly drove Isaiah and his team mad though and he took the name Despot with his team becoming the WarGuard. They were captured and Jackson spent most of his adult life trying to prove he was not like his father.

Jackson became part of the U.N. superhuman crisis team, StormWatch Prime, operating from Skywatch, an orbital base and overseen by the Weatherman Henry Bendix. Jackson, under the codename Battalion, was one of the first recruits together with Nautika, Sunburst, and Flashpoint, all Comet-enhanciles like himself. They were trained by Backlash. Battalion and Backlash were the only ones to escape a failed mission during the Gulf War, thinking the others had died (in fact they had been captured). Battalion then gathered Stormwatch One to replace Stormwatch Prime.

Jackson became romantically involved with Stormwatch-member, Christine Trelane, codenamed Synergy. Trelane had the very rare ability to activate the usually dormant powers of comet-enhanciles and increase the powers of superhumans. She was therefore of great value to Stormwatch. Another Stormwatch-member was Malcolm King, Jackson's younger brother who often had arguments with his older brother. Because of her value and the limited use of her power on a battlefield, Christine soon replaced Bendix as the Weatherman of Stormwatch. The cybernetic implants in her head, that were required as a Weatherman, did put a bit of a strain on her relationship with Jackson.

During one of Stormwatch's missions, Jackson King was thought to be killed by the WildC.A.T.S.-member Maul. In fact Maul was an imposter, sent to start a conflict between Stormwatch and the WildC.A.T.S. Jackson, who had earlier been given a glimpse into the near future, had gone into hiding, where he trained himself in more skilled uses of his powers so he could face his father. He returned when Despot and his WarGuard escaped and defeated most of the Stormwatch team. Using his newly-honed skills, Jackson saved his team.

After Despot's defeat, Henry Bendix returned as Weatherman and Christine was restored to normal. Bendix reorganised Stormwatch into different teams and Jackson was demoted from being the team's leader to trainer. Jackson didn't like this new position, but Bendix argued that Jackson's romantic involvement with Trelane would be a liability in the field. Shortly afterwards, Bendix went insane and King took his place as Weatherman. He kept this position until a few months later a group of Aliens infiltrated Skywatch and killed most of Stormwatch. Stormwatch member Winter flew Skywatch into the Sun, destroying the base and killing the Aliens. Only Jackson, Trelane and Flint survived.

The members of Stormwatch Black, a secret group of Stormwatch operatives, not based on Skywatch, went on to form The Authority. King and Trelane operated as the U.N. liaisons for the Authority for a while, but Jackson strongly disagreed with the Authority's methods and thought that he was treated like an errand boy. Jackson was contacted by the Weaver, powerful creatures who oversee the Bleed. They gave Trelane and him information on a danger that was threatening them all. To stop this danger Jackson and Trelane put together their own group, the Monarchy.

Following on from the Worldstorm relaunch of the Wildstorm Universe, Jackson will reappear in a new title named after the new incarnation of Stormwatch: Stormwatch: PHD (Post Human Division). [1]