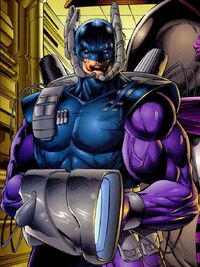 Some time ago, Dutch worked for both the CIA and the criminal group Cybernet. Giger, the leader of Cybernet, ordered Dutch to kill his CIA partner Battlestone, which he did. This was seemingly erased from his memories.

Eventually Dutch left Cybernet and settled in a cabin. Sentinel approached him to help Youngblood against Giger. After Giger was defeated, Dutch remained with Youngblood.

Retrieved from "https://imagecomics.fandom.com/wiki/Jake_Holland?oldid=65285"
Community content is available under CC-BY-SA unless otherwise noted.