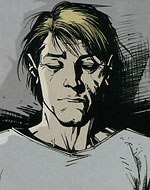 James Downing is the next Hellspawn of Earth. He has some unknown connection to his predecessor, Al Simmons, such as wearing Al's symbiotic suit, K7-Leetha.

One night, Sara is visited by an an angel. The angel is actually the new incarnation of The Redeemer. For associating with a Hellspawn, the Reedeemer prepares to kill Sara, but just before he does, he spots a cross necklace and realizes that she is a Christian. The next day, Marc meets with Jim and introduces Jim to a crippled Vietnam war veteran. Jim is displeasured by this and leaves. Later, Marc returns to Sara's apartment and shows Jim and Sara that the veteran was cured. He then reveals that he had been following Jim's story and found that everyone Jim came close to was cured if they had a sickness.

Later, the man who hired the "flaming head" kidnapper hires a towering muscled man named Malcolm (who is revealed to be "Patient 46") to take out Jim. The muscled man is shocked when he finds out that Jim is Patient 47, since he was told that he was "the last one". Meanwhile, as Jim leaves Sara's apartment, he meets Marc, who Jim attacks. However, Marc says that Jim will need a friend, and reveals that the job of bringing the old man that Jim healed in the previous issue to Jim was forced upon him by his boss after he tries to convince his boss to run a story on Jim being a faith healer. The next day, when the old man is healed, Marc's boss attempts to force Marc to continue running a story on Jim, but Marc is reluctant, believing that Jim needs some space. Marc's boss lashes out at him, and Marc quits. Jim then walks away from Marc and says that he never wants to see him again, but Marc counters by saying "in about five seconds you'll say otherwise." Jim opens the door of the building, and discovers that there are a large number of reporters outside wanting to run a story on Jim. It is then revealed that after Marc quit his job, he calls up some television channels to tell them about Jim, in an attempt to get back at his boss by getting the television channels to try to run a story on Jim instead of his former employers. As Jim is trying to get through the crowd of reporters, he encounters Malcolm. Jim morphs into Spawn and battles Malcolm at a construction site, where Malcolm reveals that he was also a "patient", and that he can't let the media see Jim in his current state. In a collision of both Malcolm and Spawn's attacks, the entire construction site is destroyed. Jim is then seen hovering over the wreckage, with the media watching and recording the event.

Jim is unable to get free from the swarm of reporters and resorts to flying away. Sam, Twitch, and a detective who has been working with them named Rowand witness the event, but Twitch is then distracted by Clown, who he pursues down the alleyway. Twitch catches Clown in the alley, but Clown morphs into Violator, Sam suffers a heart attack and Rowand is distracted by this, leaving Twitch alone with Violator. At the same time across town, Jim is packing up his belongings, ready to leave Sara's apartment to get away from the media. Marc gives Jim his business card and Jim leaves for the alleyways. Jim returns to his throne in the alley and is met by The Freak, who tells Jim that he will use Jim to "punish those who have betrayed me in my absence", and that Jim must choose Clown's side or The Freak's side. Jim morphs into Spawn and begins to battle The Freak, who reveals that he knows what Clown has been doing, and also reveals that he can drain Spawn's power incredibly quickly. Clown appears and morphs into Violator, before biting The Freak's arm off, and The Freak reveals that he controls many powerful Spawns. He then unleashes Omega Spawn from the Image United crossover, and Jim attacks him. As Jim is about to attack The Freak again, Clown stops him and tells Spawn that The Freak is his problem, and that something is wrong and not to go near him. Spawn asks why, and The Freak replies that Clown is afraid. The Freak's eyes turn green and he begins to morph, saying "it's time I show you who I really am!". The Freak reveals his true identity to be Malebolgia. After being defeated by Al Simmons, the Lords of Hell cut off Malebolgia's power and set up "road blocks" to insure that he never returned. Betrayed, Malebolgia swears to regain his true power and form and kill all those who tried to prevent his return, including the Violator who had sided with Malebolgia's greatest rival, Mammon, after Malebolgia's fall. Malebolgia orders Violator to tell of his return in order to spread fear. He then teleports, leaving a skeptical and terrified Violator alone in the wastelands of Hell. Malebolgia is seen approaching an asylum or prison inmate, demanding the prisoner return something of his.

Spawn is confronted by a new nemesis in the form of the vampire lord aptly named, Bludd. On the surface, it appears that Bludd is a rogue element, seeking to control Jim by withholding pieces of Jim's past from him. Secretly, however, Bludd has become partners with the Clown and the pair conspire to manipulate Jim and prepare for the return of Malebolgia. Jim's newfound status as a powerful healer gains him all sorts of notoriety. During a stint on a television talk show, Jim heals a boy with sever mental problems before a live audience. However, this kind of attention brings unwelcome attention to his close friends, particularly Sara. While trying to escape a crowd of paparazzi, a photographer is hit by an incoming bus. Sara pleads with Jim to save the man, but he at first refuses. Appauled by his inhumane disregard for the man's life, Sara chastises Jim until he agrees to heal the man. Due to the man being on the verge of death, Jim unleashes unprecidented power before flashing cameras and video recorders in order to revive the fallen man. This catapults Jim to world wide fame.

From atop a nearby building, a trio of vampires watches as Jim preforms the "miracle." Their conversations are interrupted by the Clown who recruits the trio, identified as "The Old Guard," and gives them the task of testing the new Hellspawn's powers. Clown then goes to meet with Jim, who has teleported Sara to her apartment and now waits in the alleys. Jim berates Clown for not being around when Jim needs him. The Clown voices his disapproval of Jim's basking in the limelight, but changes tactics and suggests Jim use it to protect himself from the forces of Heaven and Hell. The armies won't risk exposing themselves in front of the human world.

Secretly, Malebolgia plots his return to power. He journeys from Russia to Mexico in search of two old companions, humans. These humans were given fragments of Malebolgia's powers to hold onto in exchange for wealth and power, on the agreement that they would return the powers when they were requested. These keepers of "Malebolgia's Flame" hesitated to return the powers, much to Malebolgia's irritation. Angered by the men's defiance, Malebolgia used optimal force to retract the Flames from them, even promising the second keeper that he would make the extraction more painful than necessary. The retraction caused the deaths of both men.

In a secret conference with the Old Guard, Bludd sends them to confront the new Spawn without the Clown's knowledge. Upon revealing the meeting to Clown, Bludd asserts himself as the leader in their arrangement. Clown agrees to follow Bludd, but only if Bludd can prove himself to be a reliable leader. Clown relays his fears of Malebolgia's return and demands that the two partners be prepared.

In the alleys, the Old Guard confront Spawn, sitting upon the abandoned throne of former Hellspawn, Al Simmons. After the Old Guard establish that Jim and his symbiote are a powerful threat, the trio shifts their forms into those of monsterous beasts. The Old Guard attack Spawn, who seems unaffected by their attacks. Spawn eventually sinks into the shadows and begins to dispatch the vampire one by one. After the bloody slaughter of the Old Guard, Detective Twitch Williams arrives in the alleys looking for Al. Instead he finds Jim, now blood thirsty from the freshly murdered vampires. Jim threatens Twitch, to which Twitch holds Jim at gunpoint and orders him under arrest.

Far across the globe Vatican City, the Pope recieves an urgent phone call.

Jim is the white guy that Spawn transformed into in issue 3.

Retrieved from "https://imagecomics.fandom.com/wiki/James_Downing?oldid=67068"
Community content is available under CC-BY-SA unless otherwise noted.