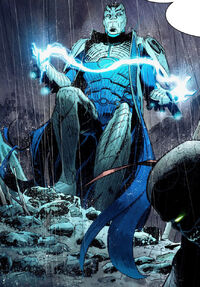 I've always been amazed how relaxed you are about destroying people.

Jason Wynn is the director of the United States Security Group, an umbrella agency encompassing the Central Intelligence Agency, the National Security Agency, and National Security Council. He is perhaps the most powerful man in the world, and has politicians throughout the government on his payroll.

Wynn also runs a heavy trade within the black market, and has formed himself a multitude of underground alliances, some of which include the Chinese Triads and the Mafia, whose boss, Tony Twist, answered directly to Wynn. He is depicted, in many ways, to be a reincarnation of Genghis Khan.

Wynn is responsible for the death of Al Simmons, who would later become Spawn. Simmons had been ordered to carry out too many bloody missions and atrocities with fewer and fewer satisfactory explanations, and was beginning to ask difficult questions; to Wynn, the master controller, this was intolerable. While on a mission, Wynn had Simmons ambushed by his partner, Chapel, and burned alive.[1]

Wynn used Machiavellian intrigue and subtle machinations to expand his power base. Wynn provided weapons to rebel armies in different countries, sometimes playing two factions off against one another so that whoever wins would be in debt to him. He was a cold, calculating, and utterly ruthless planner.[2]

Deal with the "Devil"

Wynn had an agreement with Malebolgia in which he traded the soul of his best soldier, Simmons, in exchange for Psychoplasm, the supernatural substance containing profound powers and is the very essence of what Hell. The sample that Wynn obtained from the demon lord was combined with Simmons' memories and transformed into a training ground made up of building from his past known as Simmonsville, which was a small piece of Hell on Earth and a very important project run by the US Government.[3]

Simmonsville was destroyed by Spawn during Wynn's brief stint as Anti-Spawn/Redeemer I. Because Wynn was tainted by evil, he could not attain his full potential as the Redeemer and was defeated, had his memory wiped and was returned to Earth two days after his disappearance. After this, Wynn would continue to work off and on with The Clown, Malebolgia's henchman, to try to bring about Spawn's second death.[4]

Wynn engaged in illegal arms trades and came under fire when his warehouse had several weapons stolen.[5] When he disappeared as the Redeemer his actions came under even closer scrutiny. As a result, Wynn needed a scapegoat and began blaming Terry Fitzgerald for stealing the weapons as Spawn.[6] Wynn puts several men on Terry and has him surveillanced. After tracking him for several days, several of his men were shot down by Tony Twist's men on Terry's lawn, further incriminating Terry to look like he's Spawn.[7]

To protect his friend, Spawn soon visits Wynn at the Central Intelligence Agency Headquarters and hands him incriminating files on his activities. He's ordered to leave Terry alone.[8]

Files were also given to Sam Burke about Chief Banks in the police force. When Burke discoveres that Banks had secreatly killed Senator Jenning's daughter by hiring Billy Kincaid, he began investigating Banks' contact who happened to be Wynn.[9]

In the meantime, Wynn accepted Fitzgerald into the CIA. Fitzgerald had put in transfer papers to get closer to Wynn. He still didn't understand why he had tried to kill him earlier and wanted more information by getting closer to him.[10] However, Wynn was soon forced to divert his attention into working with the Violator on setting up Spawn by squeezing the joy out of his loved ones' lives.[11]

Spawn soon invaded Wynn's office. However, he was surprised to see Terry working for the man who had killed him. When Wynn orders Terry to shoot Spawn, he hesitated allowing Spawn to escape.[12]

As Detective Sam Burke continued to close in on Banks' dealings with Wynn, Wynn tipped the dominoes to allow Banks to take fall for everything. Everyone else who was implicated in the case, was quickly expunged of any wrong doings and Wynn was once again free of persecution.[13]

However, with Terry now close to Wynn's records, he uncovered evidence of Wynn's secret arms dealings to terrorists.[14] Terry and Spawn executed several Guerrilla attacks on Wynn's secret weapons locations around world. They also freed a man who allegedly had information that would help Terry bring Wynn down, Major Fosberg. However, he seemed mostly shell-shocked and useless to providing the information they needed. Spawn kept several of the weapons that could tie Wynn to the illegal arms deals.[15]

Wynn is alerted that someone has been hacking his systems. He learns Terry has been involved and was probably responsible for the Guerrilla attacks on his secret weapon caches.[16]

Wynn orders his men to follow the recently taken Cyan Fitzgerald. He wants to learn info on who Terry has given information to. However, the kidnapping was an elaborate plot executed by Violator to pull further strife between Wynn and Spawn.[17]

Fed up with what his family has gone through, Spawn threatened Wynn at his apartment. Wynn revealed he had issued an Executive Discretionary Directive. If he died, a list of people would die as well for insurance, including Terry and Wanda. Spawn countered his threat and said if anything happened to Terry, he would in return kill Wynn. He then flaunted his power and told Wynn to prepare for the next evening to show him that no matter how much security he has, he could always get to him.[18]

To test Spawn, Wynn hired a specialist, Hull, protect his building. He then prepped his men for the attack.[19] However, the preparation was of little consequence. Spawn easily infiltrated Wynn's office and threatened him to leave him and his loved ones alone forever.[20]

Due to the infiltration and disgrace of being unable to stop Spawn, Wynn was demoted to Special Task Force. While contemplating his situation, he suddenly received visions of Ghengis Khan. He then believed it was time for action instead of planning as he received primal instincts from Ghengis Khan.

He became possessed by Billy Kincaid and entered into a diner where he shot everyone inside. He set the place on fire and waked to a nearby alley with no recollection of his actions.[21] Wynn calls central to get picked up and is afraid to learn Stoermer will send for him to be picked up.[22]

While his power diminished his ability to respond, Wynn never forgot what Spawn had done to him and his reputation. He had Overt-Kill rebuilt and ordered him to bring him Spawn's head.[23]

After defeating Overt-Kill, Spawn followed his hunch. Following up the chain of different lackeys, he eventually learned Wynn was behind the attack. Spawn appeared and Wynn told him that he would never leave him alone. Spawn agreed, since he couldn't physically harm him due to Terry, he twists Wynn's mind to drive him insane.[24]

When Mammon restored The Clown's existence on Earth and gave him a pass to take a new body, the Clown chose Wynn and assumed a dominant role in his psyche. The Clown took the form of a hallucination which allowed Wynn to collect himself enough to return to the NSA.[25] He then went on a killing spree in his spare time, brutally murdering women that resembled Wanda Blake.[26]

Later, Jason Wynn, still under control by Violator, painted Violator make-up on himself and cornered a woman who looked like Wanda somewhere in New York City. She pleaded to be let go but he closed in on her with a drill and called her Wanda. Spawn burst onto the scene and quickly overpowered Wynn. Spawn pulled back his mask to reveal he was Al Simmons and wanted him to remember it was him who brought him down. Wynn had an internal mental battle with the Violator and the Violator broke free from Wynn. Wynn then threw himself from the building and Spawn was speechless, watching him mentally battle himself. While the fall would have killed any normal man, the Violator took control of Wynn's body one more and snapped his joints and bones back into place having survived the multi-story drop. The Violator was now in complete control of his body.[27]

At this time, it is unknown if Wynn is truly dead, or possibly laying dormant inside his own body, trapped in his subconscious.

During the torture of Spawn by Grand Inquisitor Thamuz, Wynn was seen in the assembled rogues gallery alongside Clown and The Violator, but it was revealed that they were lower-level demons, masked in the visage of Spawn's enemies through the magic of Thamuz rather than the real deal.

Wynn reappeared in issue 167-168. After the white light event, he is alive and separated from Clown. Though he attempts to regain his political power and authority, he is foiled by Spawn, who confronts Wynn to gather information on the reappearance of Clown/Violator. Through out his career, Jason Wynn had gathered incriminating information/incriminating evidence on various governments and organization, preventing him from being terminated and providing him with a bargaining chip to regain his authority if lost. However, Spawn reveals that he had found and destroyed Wynn's collection of evidence, leaving Wynn without the safety net that he had built for himself as protection against all those who want him dead. Spawn then leaves Wynn to his predicament, seeing Wynn as a "dead man".

Wynn is a tall man with intense, dark, and menacing features. He is also a political genius, and has made himself the most powerful man on the planet through treachery and violence. Everyone serves Wynn's purpose, and those who don't end up dead.

Wynn has no scruples when it comes to increasing his personal power, even using child-killer Billy Kincaid to target the daughter of Senator Jennings, who was threatening Wynn's position at the time. Wynn is an expert martial artist, and a weapons expert.

Wynn's powers even extend to dealing with the supernatural. For example, he was able to repel possession by Kincaid's ghost, but not before Kincaid forced him to commit a few murders.