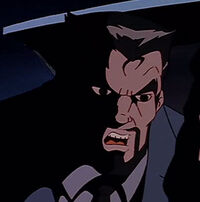 Jason Wynn is the head of the Central Intelligence Agency. He is the mastermind behind the plot that killed Al Simmons in his mortal form.

To increase his power, Jason exerts influence on Senator McMillan to run for president. In exchange, he protects his son, Billy, a prolific child-killer.[1]

He works closely with Chapel and Tony Twist to form a plan to kill Spawn.[2]

One night, Wynn received an alert that Terry Fitzgerald, one of his best employees, was investigating his illegal arms business. He dispatched Chapel to kill Fitzgerald but received the news that Chapel had been stopped by Spawn.[3] Not giving up, Wynn next dispatched Leon and Merrick to stop Fitzgerald as he closed in on a warehouse. Once again, his lackeys were stopped and Fitzgerald was able to uncover evidence that Wynn was secretly selling weapons to terrorist to deepen his pockets.[4]

Retrieved from "https://imagecomics.fandom.com/wiki/Jason_Wynn_(Todd_McFarlane%27s_Spawn)?oldid=31452"
Community content is available under CC-BY-SA unless otherwise noted.