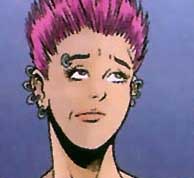 Rebound is a comic book character created by Scott Wherle and Ted Wing III in Jim Valentino's ShadowHawk #7 (November, 2005)ShadowHawk meets a mysterious red haired girl who has the power to deflect anything thrown at her.

Born in New Port City's suburban east side to a crack head father who died in prison after being gang rape. Her mother started turning tricks to support her. Later her mother meet a man named John who had money and political influence in New Port City and started to support her and mother. The price, her mom willing to turn a blind eye to the statutory rape of the ten year old.old.[1]

ShadowHawk met Rebound who has the power to deflect anything thrown at her.[2] Later on ShadowHawk sees Rebound at school.[3] ShadowHawk will go face-to-face with Rebound who may change his life forever. As ShadowHawk learns more about her, after Eddie Collins learns Rebound's real name, Jen Lyter, the two make love.[4]

Retrieved from "https://imagecomics.fandom.com/wiki/Jen_Lyter?oldid=59302"
Community content is available under CC-BY-SA unless otherwise noted.