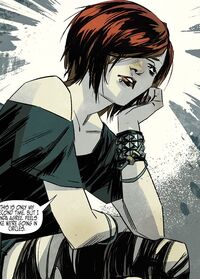 Would you rather get locked up? Because... we're family.

Jennifer was a member of Travis Crowe's anger management support group. She attempted to bond with him as she was looking for him. When Travis was later arrested, she broke him out of the police vehicle with Rory and told him that they were family.[1] After Travis left in anger, Jenny waited to let him cool off.

She approached him the next day to apologize but further infuriated him and upset his girlfriend Melissa who returned home to find a mysterious woman talking with her boyfriend who has been absent frequently.[2]

Retrieved from "https://imagecomics.fandom.com/wiki/Jennifer_(Sons_of_the_Devil)?oldid=42205"
Community content is available under CC-BY-SA unless otherwise noted.