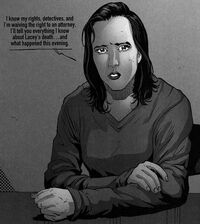 I'll see you in hell, you bastard!

Jennifer Lyons was married to Hanson Lyons and gave birth to Lacey Lyons. Lacey grew up to be a huge movie star and her husband became her manager.[1] However, he became controlling and abusive. He eventually began molesting and physically abusing the children. When she attempted to flee with Flynn one night, Hanson attempted to stop her. Flynn pulled the gun in the struggle and killed Hanson, freeing Jennifer and her family from his persecution.[2]