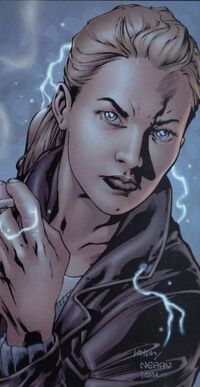 Jenny Sparks, also known as "The Spirit of the 20th century", is a character in the Wildstorm comic book universe created by Warren Ellis during his 1997 revamp of the dwindling Stormwatch series. Her first appearance was in issue #37 (Ellis' starting issue) where she was appointed the leader of Stormwatch Black (Black Ops division), with Swift and Jack Hawksmoor, with whom she would later create The Authority.

After the 12th issue of Authority Warren Ellis left the title and Mark Millar took over, he did some extra fleshing-out of Jenny's history in the Jenny Sparks: Secret History of the Authority limited series, focused on the origin stories of the members of the Authority. Most of Millar's additions are furthering Ellis's backstory and intermeshing Jenny Sparks with important historical figures of the 20th century, including Albert Einstein, Ernest Hemingway, Adolf Hitler, Jacques Cousteau, John Lennon and many others. He also added a number of fictional characters into the mix: Jenny is seen in a Vienna cafe talking to a lawyer who, it is implied, is Rumpole of the Bailey.

Jenny is one of the characters Ellis created to protect humanity, present a facet of the coming age and do something specific for it in a given century. Since the thesis given by the Doctor goes that humanity as a whole thinks that a century begins with the centennial year, so the mass unconscious of humanity creates these heroes in the beginning moments of the centennial year. (see also: Century Babies).

Her being "The Spirit of the 20th century" is not only a title. Jenny was the one most tied with the century itself, always being in the center of things, while her state of mind mirrored the spirit of the particular age. This is best shown in Stormwatch #44, where Ellis takes a ride through the 20th century, telling Jenny's story. This is accentuated by the artwork of Tom Raney, the inks of Randy Elliot and the changing palette of Laura DePuy and Wildstorm FX. The style, the layout and the colors change with each era of Jenny's life mirroring the black and white of film noir, the three colors and simple lines of the Golden Age or the dark, oppressive backgrounds and gritty characters of the eighties.

Jenny Sparks is a pretty, yet foulmouthed, chain-smoking, bisexual blonde who sleeps around. She usually wears white clothing with a Union Flag prominently displayed.

Her long life has made her cynical and aggressive towards everyone. She saw that "heroes" only ever went after the effects and never the causes of the problems in the world. Henry Bendix's promise that his Stormwatch would not act like that brought her into the team. After a long time this finally gave her purpose and allowed her to embrace her vision of a better world. This same vision also inspired her to create the Authority.

Jennifer Sparks was born in England on January 1, 1900 (the date is a running theme in Ellis's Wildstorm titles, see above). Her family possessed quite a fortune, and she was sent to an all-girls school in Vienna. Her family had died on the Titanic in 1912, and her father's arch-nemesis took over their fortune. Left penniless, young Jenny was invited by her godfather, Albert Einstein, to Zurich, where he offered to finish her education. Before leaving she recommended that a young painter, whose art was quite abysmal, leave it behind and take a career in politics as he had a certain charisma and talent for speeches.

Between 1913 and 1919 her powers started to manifest. Jenny Sparks had absolute control of electricity, including travel through power lines, shooting bolts of lightning and shaping electricity. With age her control and power increased. By 1919 Jenny had also stopped aging.

Her adventures from 1919 to the early thirties were marked by the mindset of the era - Scientific Romance. In this period the Wildstorm universe had the first contact with Sliding Albion, an alternate Earth where humanity encountered aliens in the Renaissance, and where the blue-skinned aliens and humans intermixed through the ages. In 1919 she married prince Lorenzo of Albion to help him to take power against his father's tyrannical reign. Unfortunately Lorenzo was using the British of Jenny's reality to help him take over from his father... who he considered too soft. She continued with traveling the multiple realities, visiting alien worlds, entering fast relationships with supermen and people of the era. During this time she earned the rank of Colonel in British Army Intelligence. A reporter named Clarence Cornwall became part of her life.

In the early thirties she went to America and spent most of that time as an adventurer and pulp hero. During this period she was the girlfriend of a certain Dr. Jones. In 1939 she met Elijah Snow and after a one-night-stand they both agreed that it never happened.

During World War II she was working as an allied operative against the Nazi superbeings and preventing the Nazis from obtaining valuable artifacts and ancient weapons. In 1943 she was rescuing a Tibetan egg from the Nazis. The egg was prophesied to open and bring forth a being that will usher a new age. Inside it was a small, curled up woman. (This appears to be Swift, Shen Li Min, but since the origin of her powers is known, it is likely another being that simply bears a striking resemblance). She was captured and the only thing that prevented her from being sent to a camp, where she would be dissected for creating German supermen, was her childhood friend, who remembered her and upon accidentally noticing her being dragged away ordered her to be released and sent to England with the egg.

Jenny returned to America after the war. The world no longer believed in heroes. She didn't either and her darkening turned her into a noiresque private eye who dealt her own brutal justice. With the end of the forties she decided to head home.

In the fifties she got involved with the British Space Group - The biggest clandestine stunt ever pulled on the British public, an organization involved with alien and cross-dimensional interaction and exploration. Even their banquets were held under maximum security. During one of those, in 1953, the Sliding Albion reality entered its first World War, and bacterium weapons were unleashed on their London. In a final act of contempt and spite, Sliding Albion vented the bacterial fallout over Britain. However, this agent changed while traversing The Bleed and caused the first surge of superhuman powers in Britain. Jenny didn't notice, she only felt the world losing a great opportunity to become a better place. After a while she tried to write a book about her life... but that got quashed.

The Sixties were a new age of exploration and freedom. Not only that but, the first British heroes started to band together, and quite easily took Jenny as their leader for her experience and spirit. For the first time Jenny actually felt she belonged somewhere, and with her companions was set on making the world a better place. In the late sixties, Jenny and her friends were participating in a large festival on the Isle of Wight. Tragedy struck when one of the heroes, Abel Eternity, overdosed on drugs in an attempt to prove his masculinity. Abel went into a homicidal rampage, forcing Jenny to slay him. The group disbanded and Jenny decided to go to bed until 1982.

Removing herself from it didn't go so well, as she encountered a brutal and horrifying baby-snatching plot.

Stormwatch and The Authority

Years later, she was contacted by Henry Bendix to join Stormwatch. She declined, but, ten years later, Bendix managed to convince her to join the Stormwatch Black team alongside Swift (with whom she had a brief relationship) and Jack Hawksmoor. She was given command of the team against her will. Stormwatch Black was a covert insertion team, specially built for urban environments.

After a few missions, an old friend of hers, the former superhero known as The High, reappeared after decades of self exile, leading a group that wanted to change the world by removing the structure of society itself. It would be no more laws, no authoritarian structures, no crime and no war. Bendix didn't want her to know, but The High appeared on the TV news and Jenny saw him. Around this time, Jenny survived an assassination attempt by a needle-armed adversary. When Jenny confronted Bendix about The High, and about the fact that Bendix had given orders to Stormwatch to kill The High and his group, he revealed the depths of his insanity. Jenny was forced to strike him down, but he escaped. In the ensuing chase, Jenny saw that he had killed all of the facility's cryogenically frozen prisoners. Afterwards, an enraged The High flew right to the Skywatch platform. Being temporarily in command, Jenny was forced, crying, to order the staff to raise the Storm Door forcefield to protect the hundreds of people on board. The High vaporized upon impacting against it. Some time later, Jenny finally tracked Bendix down and killed him, or so she thought.

When Stormwatch disbanded after the Aliens attack that took the lives of half the team, she created the Authority alongside her Stormwatch Black teammates, with the goal to change the world, no matter what it takes. Old friends Battalion and Synergy assisted her in the beginning.

During her leadership, Jenny and her team faced many threats, including multiple attacks by Sliding Albion forces on Los Angeles and super-powered terrorists attacking many cities, including London and Moscow.

On December 31st, 1999, Jenny Sparks knew that she would die at midnight as the 20th century ended (the end of the 20th century according to consensus reality, at least), a fact known only by her teammate the Doctor. She electrocuted the brain of an enormous alien creature, the "God" that had originally created Earth and which was planning to wipe the planet clean of all life. This was her final act as humanity's defense mechanism. She died moments later in her teammates' arms. Her dying words and last will were: "Save the world. They deserve it. Be better. Or I'll come back and kick your heads in."

During the Transfer Of Power storyline, a magical version of Jenny appeared and temporarily removed all mechanical weapons from the Earth.