"The Spirit of the 21st Century" 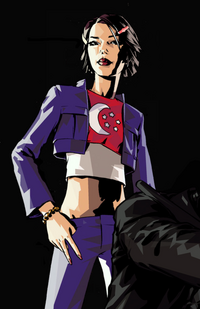 Jenny Quantum was born January 1, 2000 in Singapore, during the death of Jenny Sparks, where her birth mother was killed by super villains attempting to kidnap her and shape the coming century. Her biological father’s identity and whereabouts are unknown. She was rescued and cared for by the Authority and later adopted by Apollo and Midnighter shortly after their marriage. She is the current leader of superhero team, The Authority.

Quantum forced herself to age several years into her teens so that she could better fight the threat of Henry Bendix and his evil group. While fighting Bendix, Jenny was able to free the current Doctor, Habib Ben Hassan, and enlist him in the fight against Bendix.

Retrieved from "https://imagecomics.fandom.com/wiki/Jenny_Quantum?oldid=62606"
Community content is available under CC-BY-SA unless otherwise noted.