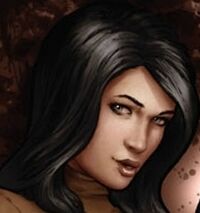 Jenny grew up in the same orphanage as her long-time friend Jackie Estacado. As they grew up together, she did foster romantic feelings for him for quite some time, but shortly after he became host to the Darkness she recognized that his life was too dangerous to involve her, and she left him. Later, they would reunite under vastly different circumstances and she reveals that she was then dating.Ripclaw [1] Sadly, she is murdered by Uncle Frankie in retaliation for Jackie's turning him over to the Federal Witness Protection.[2]

Retrieved from "https://imagecomics.fandom.com/wiki/Jenny_Romano_(Top_Cow)?oldid=56570"
Community content is available under CC-BY-SA unless otherwise noted.