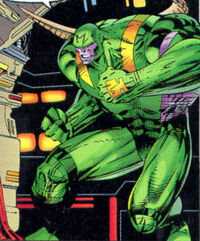 Maul is a half human, half titanthrope (a subspecies of the Kherubim), biochemist from Earth. Maul experiences powerful rage and is actually a Nobel-prized scientist named Dr. Jeremy Stone.

Jeremy Stone spent the early years of his life unaware that he was not entirely human. However, when Jeremy discovered his heritage and his ability to transform into a giant being of superhuman strength, he joined the intergalactic war between the Kherubim and Daemonites, becoming a member of the WildC.A.T.S. and using the codename Maul.

When the WildC.A.T.s travelled to Khera, the Kherubim native homeworld, he discovered his ancestors made up part of a caste of artesans who were the original Kheran natives (now called Titanthropes), but were dislocated to the subterrans by another alien race.

There, he fell in love with another Titanthrope, a woman named Glinglo. She gave her life to prevent an attack using bombs planned by the Coda. They intended to frame the Titanthropes, but the plan was exposed and the bomb killed her. This was a serious emotional blow to Maul. Later, when the team returned to Earth, he quit the WildC.A.T.s to become a professor. At the end of the first series he came back, but soon left when Zealot was apparently killed.

In the second series, it was revealed he could increase his intelligence by decreasing his body mass, but this proved to be physically depleting. Jeremy has devoted himself to science and has shown some reluctance to use his superhuman powers these days. He has also started a relationship with Voodoo. He was nearly blind after Samuel Smith's attack, but he recovered.

Jeremy founds himself yet again working alongside his Wildcats teammates, taking on the possibly cataclysmic threat of Captain Atom that led to Worldstorm.

His relationship with Voodoo has ended recently; an aspect of her telepathic powers is that they increase with physical intimacy, and Voodoo's willingness to be intimate with other men to use them was, despite his protests, not something Jeremy could cope with. The break-up fight was ended when Pricilla intentionally angered him to the point that he grew in size. With the resulting loss of intellect that comes with his size growth, he forgot they were fighting, and she took the opportunity to leave. (as of Worldstorm #2)

Retrieved from "https://imagecomics.fandom.com/wiki/Jeremy_Stone?oldid=65385"
Community content is available under CC-BY-SA unless otherwise noted.