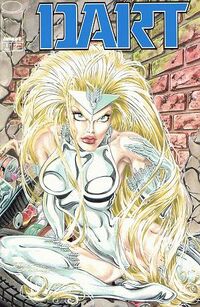 Jill August (aka Dart) is an Image Comics superhero. Created by Erik Larsen, she first appeared in 1993, in The Savage Dragon #2(ongoing series).

Jill August was born on August 12, 1969, in Detroit, Michigan. She grew up timid and demoralized, witnessing her mother's constant spousal abuse at the hands of her father, and her friends' abuse at the hands of a cruel coach at school. She witnessed her father beat her mother to death, a crime for which he was sentenced to life in prison, effectively leaving Jill an orphan.

As a teenager, Jill saw a female friend being assaulted by several men in a bar in Detroit. Attempting to intervene, she fell against a dartboard hung on the barroom wall, and the men began to attack her as well. Instinctively, she used the darts to defend herself, throwing them at her attackers with astonishing accuracy, seriously injuring all of them. She subsequently decided to use this newly-discovered skill to both help others and manage her feelings of helplessness (and the rage that comes with those feelings).

Jill trained herself in a number of martial arts disciplines and sharpened her already formidable dart-throwing accuracy. She designed a costume and took the name "Dart" to become a superhero in Detroit. Early in her career, she occasionally teamed up with another Detroit-based hero, the narcissistic Kill-Cat.

After spending three years as a Detroit-based costumed vigilante, Dart was contacted by the Chicago Police Department to solicit her participation in a new program wherein super-powered vigilantes would be recruited into the police department for legitimate service. She accepted and moved to Chicago where she met the Savage Dragon, Ricochet, HHorridus, Barbaric, and other super-powered recruits. The program was a failure, though, as most of the costumed heroes could not or would not cope with the realities of everyday police work (such as wearing a police uniform instead of a costume). These recruits quit en masse and, along with newfound friends Superpatriot and Mighty Man formed their own heroes-for-hire outfit known as Freak Force, under the nominal leadership of Dart.

After a few years of reasonable successful as independent troubleshooters, Dart and most of the Freak Force were recruited by the United States government to replace Youngblood, who were presumed to have been killed by Martians. This new group was called the Special Operations Strikeforce (S.O.S.), although Dart was refused active status for a number of months due to administrators' reservations about her reliability.

Once she was allowed active status, Dart participated in a raid on the nation of Lieberheim to assassinate the super-powered dictator Dread Knight. During the battle, Dart was hit by an energy blast that vaporized both of her legs to just above the knee.

Due to her disability, Dart was relegated to a role as Strikeforce's team trainer. Several years later, Dart and other former members of Freak Force were attacked by an evil Mighty Man while attending the funeral of Ann Stevens (the second Mighty Man). In the ensuing battle the Savage Dragon killed this evil version, and the super-powerful Mighty Man persona was passed on to Dart, enabling her to transform into a massively powerful blond male by making a magic gesture of tapping her wrists together.

After issue #75 of the Savage Dragon, a second, alternate Earth was introduced into that universe. Twenty-eight issues later, in #103, the original Earth was destroyed, killing virtually all of its inhabitants, including Dart, now the fourth Mighty Man.

The version of Dart from the alternate Earth continued to exist, however. In that reality, she never lost her legs, but also never became Mighty Man. Less than a year after the destruction after the original Earth, this alternate Dart was murdered by the villain Mako, who punched her head off.

Jill August's niece has since taken up the mantle of Dart.

Dart has appeared in numerous issues of Savage Dragon as a supporting character, as well as being a major character in the Freak Force series and subsequent mini-series. In February 1996, she received her own eponymous three-issue limited series.

Retrieved from "https://imagecomics.fandom.com/wiki/Jill_August?oldid=66918"
Community content is available under CC-BY-SA unless otherwise noted.