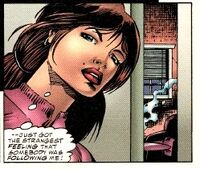 Jill Monroe is the name of a supporting character featured in Wildstorm's Union series during Volumes 1 and 2. She was the unofficial girlfriend of the titular Superhero Ohmen, who worked as Union, for the U.N.-sanctioned superhuman team StormWatch.

Jill Monroe, an American living in the Northeastern United State of Maine was a struggling artist, who was the first human to meet Union during his crash-landing through a dimensional gateway, landing on a frozen lake.[1][2] From that moment on, Union felt indebted to Jill for having saved his life. She agreed to let him stay with her for as long as he wanted as Union was a stranger to Earth and also because he had nowhere else to go or knew of anyone living on Earth who could help him.

For the most part, Jill and Ohmen lived like a couple, although they never truly pursued any serious romance. Overtime, Jill had become involved in the on-going quarrels that carried from Ohmen's world to Earth between Protectorate and Directorate forces. Jill was visited by Ohmen's home planet compatriots including Eliya and Maikone.[3][4] She witnessed Ohmen's battle with a powerful Superhuman named Crusade,[5] in the middle of New York City. Jill over time began to grow tired of playing the part of what she felt as "being the good little woman, waiting for the man to return". This manifested to a boiling point after a trip to Chicago after she discovered the kind of money Union was making as a reservist in StormWatch. Instead of a luxury vacation for three (Jill and Ohmen met up with a friend of hers while in Chicago), Ohmen joined The Savage Dragon[6] in a mission to stop a crime syndicate. It was after the trip, that Jill declared her intent to separate. However, she was lured to the promise of quitting her miserable job as a waitress, due to Ohmen's salary intake. This caused her to quit her job before realizing she was separating from Ohmen, thus would not be sharing in the money he was making.

Jill went on to move out on her own again after meeting with a gigantic fellow who saved her life during an alleyway mugging. Little did she know it was Regent, Directorate Prince from Ohmen's home world. She went on to cultivate a fast and heated romance before discovering his true identity as another individual from Ohmen's homeworld.[7]

Retrieved from "https://imagecomics.fandom.com/wiki/Jill_Monroe?oldid=39920"
Community content is available under CC-BY-SA unless otherwise noted.