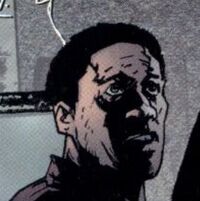 He was brought tapes from Sam Burke that depicted the John Doe Killer murdering innocent victims. After Jimmy reviewed the tapes, he confirmed to Sam that it was most likely real and that the guy was a professional.[1]

Later, Jimmy met with Sam and Twitch Williams off duty. They asked him to dig up information on two FBI agents that were working the JDK case. Sam and Twitch believed the agents may have been tainting the cases. He later returned with evidence that incriminated the agents in the JDK killings.[2]

Retrieved from "https://imagecomics.fandom.com/wiki/Jimmy_Murphy?oldid=39571"
Community content is available under CC-BY-SA unless otherwise noted.