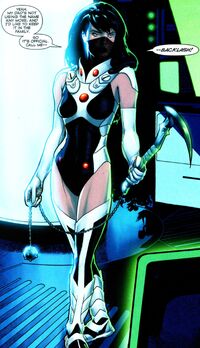 Jodi is the daughter of Marc Slayton and Lynn Morinaka, albeit Marc didn't know that Lynn was pregnant when they parted ways. Lynn actually had twins, a boy and a girl, but the boy was taken by Kaizen Gamorra, who turned him into his right-hand man Aries.

Jodi's mother taught her martial arts since she was five years of age. Lynn died when Jodi was 16 years old, so the girl used the information her mother had given to her about her father to meet him in America. After she met Marc (now the superhero Backlash) and his partner Cyberjack, Jack agreed for Jodi to remain with them due to her good cooking and cleaning which was something that both ex-soldiers lacked until then.

When Marc and Jodi were attacked by Bloodmoon and his Kindred henchmen, Marc found out that Jodi had inherited his Gen-Factor and had superpowers. Jodi made a red costume for herself and tried to become the superheroine Crimson, but her father disapproved. Jodi also became friends with Amanda Reed, an ally of Backlash who was romantically interested in him.

When Marc went to Gamorra with the rest of Team 7, Amanda and Jodi also went there in search of the lost Cyberjack. There, Jodi found Marc again, accompanied by Bobby Lane, A.K.A. Burnout of Gen¹³, and she developed a crush on him. They also faced Aries, and Jodi was surprised that he was a Gen-Active. Jodi, Bobby and Aries, who had been taken prisoner, got separated from the others, but eventually reached Kaizen's fortress, where they reunited with the rest of Team 7 and Gen-13, and helped them against Ivana Baiul and her DV8. Aries escaped during the fight, but Jodi finally deduced that he was her brother, artificially aged by Kaizen.

When Marc became the leader of Wildcore, Crimson became an on-again/off-again ally of the team while beginning a relationship with team member Styrian, much to her father's shock. Jodi got disenchanted with the superhero life after losing Styrian, and abandoned her Crimson identity.

Jodi later took her father's codename Backlash when she worked with Savant and became a member of the WildC.A.T.s.

Retrieved from "https://imagecomics.fandom.com/wiki/Jodi_Slayton?oldid=68883"
Community content is available under CC-BY-SA unless otherwise noted.