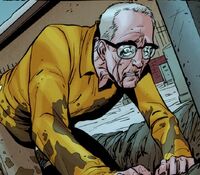 Joe Myers died in a hospital. He had been declared dead but shortly there-after woke up due to Reviver Day.[1]

Later, his wife was looking for him and was concerned what could be going on as he was a Reviver. She found him lost and digging his own grave in the rain with his bare hands.[2]

They later met with Aaron Weimar,[3] and began taking therapy from him. Joe informed Aaron that he had been having strange thoughts since he came back to life. He was constantly obsessed with finding things, such as a gold ring that had gone missing.[4] He told him he once, long before Sherry, was in love with a farm girl named Mimi. That ring was actually going to be hers. However, she left him for another man and he never saw her again. He never stopped loving her until the day he died. Now he realized he doesn't really have feelings anymore as a Reviver.[1]

The next day on Valentine's day, Aaron met with Joe again. Joe told him his old housekeeper had called to return the ring, but she forgot where she had put it. When Aaron asked how it made him feel, Joe became upset and told him he couldn't feel anything as he physically grabbed Aaron's arm to get his attention. When Joe realized he felt something after touching Aaron, he leaped over the desk and kissed Aaron on the lips. After being pushed off, Joe acted like he saw a vision of who Aaron really loved, and promised him he would never stop loving her and referred to Em's smile.[5]

Later, Joe wandered to the hospital where Thang Vang created a new ring for him to replace the old one. He self-immolated and disappeared the same way Tommy did upon feeling complete with the ring.[6]

Retrieved from "https://imagecomics.fandom.com/wiki/Joe_Myers_(Revival)?oldid=43133"
Community content is available under CC-BY-SA unless otherwise noted.