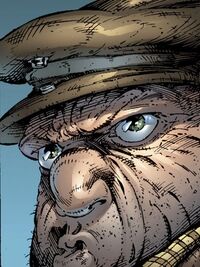 John Leekley doesn't believe in religion and doens't like Spawn in his alleys. When he was caught planning a robbery and planned to blame it on another bum, Spawn confronted him. John turned on Spawn and surprisingly murdered him as they were in the Dead Zone, a small patch of Heaven on Earth.[1]

Later, John brought a bag of Necroplasm to The Freak to prove he successfully killed Spawn. He was attacked by the Feak for disobeying orders and died with a pin stuck through his eyeball.[2]

Unknowingly, this Necroplasm bag was left in the alleys and created The Heap when he discovered the bag.

Retrieved from "https://imagecomics.fandom.com/wiki/John_Leekley,_the_bum?oldid=32179"
Community content is available under CC-BY-SA unless otherwise noted.