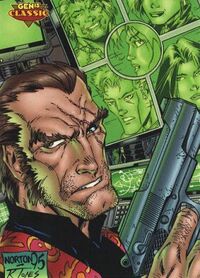 Lynch was once a top agent for International Operations, until his sterling record attracted the attention of his superiors, and he was recruited to lead Team 7, a team of the finest and best operatives that all the various government forces (CIA, NSA, FBI, Army, Marines, etc) could offer. Lynch was codenamed "Topkick". While he was nominally the leader, he had difficulty getting the respect of his teammates, due in part to his unquestioning following of orders and his strict adherence to the rules. He naively believed the government would always act with the best intentions, even after the group were deliberately exposed to radiation in an experiment to see if they could survive.

The groups' exposure to the Gen Factor occurred when they were sent on a supposed blackbag mission (just shoot everyone) which turned out to be a trap concocted by Miles Craven who was in charge of all Team 7 activities. Waking up a few weeks later all of the members with the exception of Michael Cray (Deathblow, whose powers would not reveal themselves for about 20 years) displayed greatly enhanced mental powers.

The Team later broke up when they were sent on another bogus mission, and Craven sent a low yield nuke down on top of them. After the team broke up, Lynch was the only one to stay with the Government, and became a Major. The government attempted to put together another squad, Team 8, but they were killed on their first mission in Cambodia. Needing Team 7 for one more mission, the government pardoned Deathblow and he and Lynch went and found the rest of the team living in Nicaragua. With some persuasion the group were convinced to briefly reunite. It was during this mission Backlash learned about his psionic whips, and Jackson Dane from Wetworks lost most of his memories.

In the late 1970's Lynch lost his eye by his own free will when he tore it from his skull during a fight with some sort of mutated being in a top secret military facility in Leningrad. Shortly afterwards, his wife left him and took their son with her. He stayed in government service, becoming a Director of Operations at I.O., with one his his major motivations being the search for his missing son. But when the kids of Gen¹³ were recruited without his consent and exposed to experiments which had turned many members of Gen 12 insane, he helped Gen¹³ to escape and left I.O. One of Gen¹³'s members was his own son, Burnout, from whom he had been separated years before.

He stayed with Gen¹³ in his house in La Jolla, San Diego, acting as their mentor until I.O. raided the house. The team kept moving around and Lynch started to display paranoid behaviour. When several Gen¹³ members were taken into the future, Caitlin Fairchild encountered a future version of John Lynch, an insane and dangerous man. Returning to the present, Fairchild saw Lynch slowly becoming the man she had seen in the future, causing a rift between Lynch and the team. This rift finally became so strong that Lynch left the team and Alex Fairchild, Caitlin's father and another Team 7-member, took over as their mentor. Alex died shortly afterwards and Lynch returned. Caitlin finally told Lynch about his future version, but added that recent events had shown her that he was a different man than the man she encountered in the future.

Shortly afterwards the villain Tao kidnapped Lynch and took his place. Lynch meanwhile was made to think that he was an overweight man named Earl, living a normal life. Gen¹³ defeated TAO, while Lynch slowly recovered his memories and lost the extra weight. Gen¹³ searched for him without any success. Lynch contacted them, telling them that he was planning on living a normal life as Earl for a while together with the nurse who had been taking care of him during these past few months. (see discussion page)

In reality, Lynch had become convinced that he was the only one who could stop the enigmatic Tao. He returned to I.O. and regained his post as a Director of Operations. It was during that time that he placed his former star pupil, Holden Carver, undercover in TAO's syndicate. Several months later, the Divine Right incident led US government to shut down International Operations. Lynch agreed to work for the Department of Paranormal Science Investigations (PSI). He maintained regular contact with Holden Carver.

In the fall of 2002, Lynch decided to extract Carver, feeling that placing him under cover was a mistake. He recruited Cole Cash, his former Team 7 teammate, to help him. The plan went awry when Lynch got shot through the head by a mind-controlled Cash. Although his Gen-Factor saved his life, he remained in coma for over a year. Late 2003, he emerged from coma. Shortly afterwards, the Authority took over United States. He persuaded his new superiors to allow him to recreate I.O., this time as Internal Operations, a security agency dedicated to hunting down TAO and the members of the Syndicate.

Today, John Lynch continues to head I.O, with Marc Slayton acting as his second-in-command. It is unknown whether he still maintains contact with Gen¹³.

Seen in the new Gen13 title, John Lynch appears to be a simple, if high-ranking, soldier for IO, attached to the Tabula Rasa project, which is responsible for creating IO's supersoldiers (and seemingly selling some to private bidders). Lynch is a hunter, tasked with making sure that no experiments escape; however, he failed with the Gen13 team, who managed to reach the facility's experimental teleporter in time.

It is interesting to note that in this new universe, Lynch's missing eye is a result of his trying to stop Gen13's escape - Rainmaker fried it with her lightning.

Retrieved from "https://imagecomics.fandom.com/wiki/John_Lynch?oldid=49737"
Community content is available under CC-BY-SA unless otherwise noted.