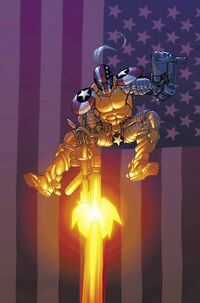 SuperPatriot is an Image Comics superhero created by Erik Larsen in 1992. Superpatriot has had regular appearances in Erik Larsen's titles, whether in his own mini-series or as a supporting character and is currently a member of the Liberty League.

SuperPatriot was once Johnny Armstrong, a soldier in World War II. Captured by the Germans, Armstrong was used as a guinea pig for scientific experiments and gained superhuman powers. He destroyed the base at which he was being kept so that the Nazis could not replicate the process on their own troops, and donned an American flag-styled costume to become SuperPatriot. SuperPatriot later joined the superhero group called The Allies, working with such figures as Supreme and Mighty Man, and protected the innocent for many decades.

However, in the 1990s, SuperPatriot was faced with more brutal and intense supervillains than ever before and began to have difficulty dealing with them. Eventually, he was overpowered by members of the Vicious Circle, a group of supervillains organized by Chicago crime-boss Overlord. Superpatriot was savagely attacked by his foes, with the shark-man Mako biting off his limbs and much of his face. Left for dead, SuperPatriot's body was taken by Cyberdata, a corporation of subversive scientists, and transformed into a powerful cyborg.

Initially his transformation made him highly unstable and he embarked upon a violent spree of vigilante murders, clashing with Savage Dragon. SuperPatriot was easily controlled while in this addled state and was made into a puppet killing machine by terrorist groups like the Covenant of the Sword. Also, he was temporarily controlled by the entity known as The Horde. Fortunately, the SuperPatriot later regained his own mind and became a superhero again, joining the newly-formed Chicago group called Freak Force.

Sometime after being freed from Cyberdata & the Covenant of the Sword's control John learned that he had fathered two children. The twins (a boy and a girl) grew up to become Liberty & Justice. His ex-wife, who the twins and John thought dead, was revealed to be alive and was a member of the Covenant of the Sword prior to marrying John. His daughter also seems to think the Covenant isn't as bad as it's made out to be.

SuperPatriot is well-respected in the superhero community, becoming one of the main resistance leaders during the Mars Attacks The Image Universe crossover.

In the 'Savage World', the alternate Earth depicted in Larsen's The Savage Dragon series, SuperPatriot was controlled by Cyberface until his eventual downfall. Afterwards, he rejoined the newly reestablished Liberty League and has had various adventures, including meeting Claire Bono, and eventually marrying her.

SuperPatriot is currently still married, to the much younger Claire.