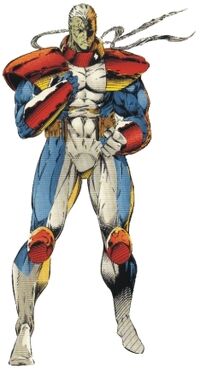 They fear me? They should.

John Stone is Battlestone, a Nu-Gene and founding member of Brigade.

Discovering as a kid to be Nu-Gene positive like his father John followed him to New Heaven, a refuge for Nu-Genes built to keep them safe from hateful humans. Years later his father's enemies killed his mother in revenge and young John, considering his father responsible for such tragedy, began to harbor a great deal of hate for him.

During the forties he was invited in the Allies by Roman. Some time later he was assassinated and brought back to life through Project: Born Again.

To make things worse John furtherly strained his relationship with his brother by bringing him back to life through Project: Born Again against his will.

After being expelled from Youngblood following the accidental death of one of his subordinates during the Persian Gulf War John started to work as a mercenary until he founded the first version of Brigade with Lethal, Kayo and Boone.