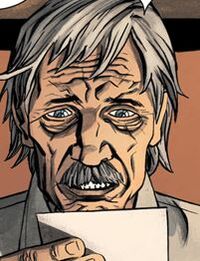 John Van Der Zee is a wealthy man in New York City. His wife and son died in short order of each other. One day, his wife started visiting him every night. When a picture of his wife disappeared, he stopped seeing his wife's spirit at night. He sought out Vivek Headland's assistance in figuring out the reason and culprit. However, Headland excused himself as he bit into his ham sandwich as he had a precognition vision. He headed to a local deli where the man had served them the bicep of John's son instead of ham. John was unaware of what Headland was doing at the time.[1]

Later, Vivek went to John's home to investigate. Through advanced tools, Vivek found vaginal ectoplasm and suspected John had been having sex with the ghost of his wife. Vivek also found a computer screen with the Injection symbol on it and realized John had potentially been under its influence.[2]

Retrieved from "https://imagecomics.fandom.com/wiki/John_Van_Der_Zee_(Injection)?oldid=55616"
Community content is available under CC-BY-SA unless otherwise noted.