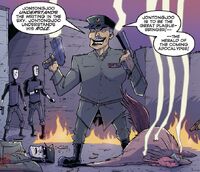 JonTongJoo was the leader of North Korea. He began research on a synthetic avian flu bio-weapon. He completed it on task and at a rapid pace. This caught the attention of the NASA who sent in agents to stop the leader. He was ultimately murdered in the assault by Poyo when agents released him as a last-ditch effort.[1]

Retrieved from "https://imagecomics.fandom.com/wiki/JonTongJoo_(Chew)?oldid=58662"
Community content is available under CC-BY-SA unless otherwise noted.