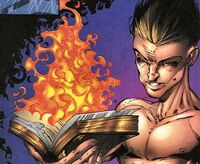 Joseph Yallod is a prestigious worker for Whiteside Parson Institute. When Celestine gave her body to temporarily send the institute to Hell, her bones and flesh turned to ashes. Joseph gathered these ashes and absconded with them to his home.

He cast magical spells to protect himself from the forces of Hell and began spells to resurrect the Angel and bring her back to life. He had plans to mate with her and raise children.

Angels teamed up with Naamah, a personal errand runner for one of the devils, to kill Yallod in order to stop his spell and trap Celestine in Hell.

Retrieved from "https://imagecomics.fandom.com/wiki/Joseph_Yallod?oldid=49743"
Community content is available under CC-BY-SA unless otherwise noted.