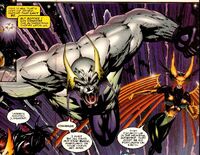 Judgment is a supervillain from the Wildstorm universe. He first appeared in Volume 1 of the StormWatch series.

Little is known about Judgment. He was introduced as one of the later members of the supervillain team known as the Warguard. Judgment served Despot's Warguard as its field commander, as mentioned by Stormwatch's newest team leader Spartan during a team battle on the moon[1]. It was never known what precisely Judgment's abilities were despite his size and aggressive attitude. He was primarily seen and heard calling for "heads" during any engagement, not at all upset with whether he collected heads from his enemies or allies. He appeared briefly during the post-Wildstorm episodes following Stormwatch's involvement with defeating Lord Helspont. This could be referred to as the Despot Crisis during which Judgment and all the Warguard were released to supposedly stop Helspont but refused and fled Skywatch to pursue their newfound freedom[2]. When Stormwatch, led by Synergy and Spartan tracked the Warguard to a lunar outpost, Judgment led an ambush on the team. He was also seen later boarding a deserted Skywatch station with the Warguard, believing they would destroy the remnants of the Stormwatch team. But the Warguard were lured aboard the space station long enough to fall to Earth when the station was programmed to drop out of orbit to crash into Death Valley.

Judgment again led the Warguard in an all-out battle against the surviving Stormwatch team and even stood toe-to-toe with Battalion[3] who was brought from the past by Timespan, to behold the future of Earth and Stormwatch. It was unclear the outcome that one-on-one fight as in that particular timeline, both teams were felled by the mental powers of Despot who began his systematic "cleansing" of humanity across the world[4].

Retrieved from "https://imagecomics.fandom.com/wiki/Judgment?oldid=65300"
Community content is available under CC-BY-SA unless otherwise noted.