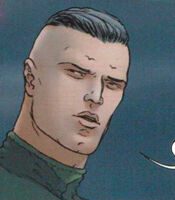 Jules Sampson is the son of Walter and Sunny Sampson. Jules is believed to have one or two siblings, one of which is a sister.

As an adult Jules joined the Union of Justice, but after saving a woman from a fire, he began dating her which caused his uncle Sheldon to kick him off the team for conduct unbecoming a super-hero.

Retrieved from "https://imagecomics.fandom.com/wiki/Jules_Sampson_(Jupiter%27s_Legacy)?oldid=58358"
Community content is available under CC-BY-SA unless otherwise noted.