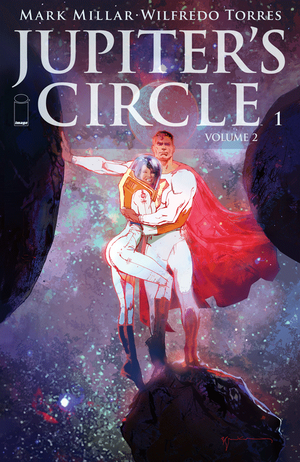 I'm picking up a signal, a thousand miles from here...

Appearing in "Chapter One"

Plot Synopsis for "Chapter One"

Jane is whisked away to a moon of Jupiter for a date by her super-powered husband, Sheldon. She thinks about how he brings her breakfast in bed and does all the chores around the house. He's CEO of a successful company, and takes her on fancy dates.

Meanwhile, Grace sits at her office job and looks at creating a single's ad. She thinks about how she can't seem to find a man. Suddenly, Professor Prism broadcasts on TV that he's stolen all the colors of the world. Grace looks around and everything is suddenly in black and white. Grace runs off to change into her superhero costume as Lady Liberty.

Later, at a diner Grace is in her civilian clothes with Jane. She explains how she stopped Professor Prism and made him return all the colors to the world. Jane is amazed at her accomplishments but Grace is disappointed she can't even get a man. Jane explains she is nearly perfect in physical beauty and attributes yet can't keep a man. Jane believes it's because men are intimidated by her. Jane then begins to explain to Grace her plans for her anniversary with Sheldon where they're heading to one of Jupiter's moon.

On one of Jupiter's moon, Sheldon telekinetically keeps an air bubble with them so that Jane can still breathe. Jane expresses insecurities of why he chose her over Grace, who she considers a perfect partner. He allays her concern and tells her he chose her. He hears a sudden disturbance and rushes to see what it was. He finds a strange controller on the ground and looks up to see an entire underground city hanging upside down. He returns to show Jane and she feels insecure and asks to be brought back to Earth.

Later on Earth, Grace attempts to get drunk with a sailor. When they return to the motel to hook up, the sailor gets cold feet and leaves her.

Later, Sheldon continues his perfect relationship by offering a date on the moon with Jane.

Grace heads to a beach to relax and read books by herself.

Sheldon meets with Walter Sampson and shows him the device. The two are stumped at to what it could be.

Retrieved from "https://imagecomics.fandom.com/wiki/Jupiter%27s_Circle_Vol_2_1?oldid=58138"
Community content is available under CC-BY-SA unless otherwise noted.