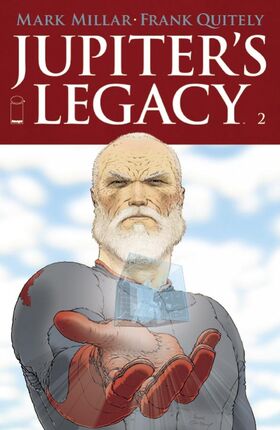 In the Bay Area, Brandon Sampson was using his telekinetic powers to carry a cargo ship in the sky. Suddenly, the ship started tilting and dropping cargo containers. The Utopian arrived and stopped the containers from falling, before scolding Brandon. The Utopian and Brandon argued briefly before parting ways. Meanwhile, in Los Angeles, Chloe was in a hospital bed and learned that she was pregnant. Jules came in, much to her annoyance, but left after she yelled at him. At the Blarney Inn in Long Beach, two men in suits confronted a man named Hutch, who used his power rod to send one of them into shark-infested waters, killing him, before the other one, Linus, left out of fear. Then, Hutch grabbed the hand of Chloe, who happened to be sitting right behind him. Later, Chloe and Hutch went to the former's house in Santa Monica, where she complained about her parents. Meanwhile, there were protests outside the White House in Washington, D.C., where Brainwave was holding a meeting. The Utopian walked in on the meeting and pulled Brainwave out, before the two argued about how to fix the economic crisis. Later, Brainwave went to West Hollywood, where he found Brandon drinking after his encounter with his father. Then, Brainwave proposed to Brandon betraying the Utopian, which the young man agreed to.

The comic book event of 2013 continues as the schism between the superheroes widens and a plot to unseat the greatest hero of them all emerges. Celebrate the 75th anniversary of Superman this month by buying this frankly much-more interesting book by superstar creators MARK MILLAR and FRANK QUITELY.

Retrieved from "https://imagecomics.fandom.com/wiki/Jupiter%27s_Legacy_Vol_1_2?oldid=76722"
Community content is available under CC-BY-SA unless otherwise noted.