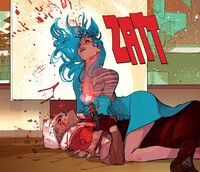 K-003 was a great supporter of art even though it was outlawed in her home Voldin. She secretly dated Della Caine but was murdered by Della when it was discovered that she was painting and expressing free thought.[1]

Retrieved from "https://imagecomics.fandom.com/wiki/K-003_(Low)?oldid=42189"
Community content is available under CC-BY-SA unless otherwise noted.