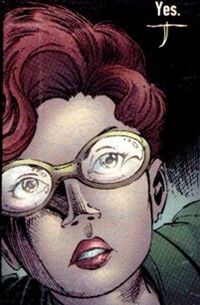 K.C. McRory is the medical examiner for the New York City Police Department. She analyzed the duplicate body pieces found by Sam Burke and Twitch Williams in the Udaku murders and found the genetics pointed they were from same person.[1] She was eventually fired for being associated with Sam and Twitch,[2] but was reinstated when Sam uncovered Barbara Rodriguez was secretly working for the Federal Bureau of Investigation.

When she visited Twitch to thank him, the two shared a moment that was quickly interrupted by Sam bursting into the office.[3] The two became closer and started dating over the new few weeks. They discussed kids and activities they could do together to spend more time with them. K.C. told him she works so hard at her job because she was afraid she would get the kid-in-the box situation. One where they never solve the case or get closure for a poor innocent boy.[4]

However a ruthless bounty hunter, Bilal Christian, was hunting a perp near K.C.'s apartment. A shot from his gun found K.C.'s heart and she was placed in the hospital.[5] She was soon pronounced dead at the hospital due to her wounds.[6]

Retrieved from "https://imagecomics.fandom.com/wiki/K.C._McRory?oldid=39828"
Community content is available under CC-BY-SA unless otherwise noted.