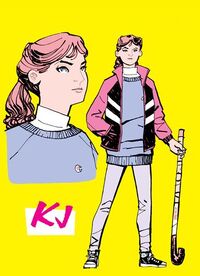 KJ (Karina) is one of four main characters in the series Paper Girls. She is Jewish, attends private school (in her case, Buttonwood Academy) and plays field hockey (as her weapon is a hockey stick). Along with the rest of the main characters, she lives in the fictional suburb of Stoney Stream, delivering the Cleveland Preserver newspaper.

On the morning of November 1, 1988, the four main characters meet for the first time, defending Erin Tieng from a group of older teenagers. KJ, Tiffany and Mac know each other, and made a pact to help each other on their routes, particularly during "Hell Morning" when, as Tiffany says, "...'Cause of all the crazies still out".

KJ teams with Tiffany, and is with her when they are attacked (and Tiffany's hand-held is taken) by mysterious strangers. After being joined by Mac and Erin, the four fight back, and track the intruders to a half-completed building in a new development. All four then find a mysterious capsule that looks like a spacecraft, which turns out to be also a time machine. All four are then exposed to a strange radiation from the craft. They notice the stars look different, as well as new intruders. The also realize that the adults have mysteriously vanished.[1]

The girls retreated to Erin's home where they tried to dissect what was happening. It appears all the parents had suddenly left town. Mac proposes they head to her home as her father has a gun. Erin tries to tell them that they are supposed to call a grown-up in times of need. Mac picks up the phone to show there is no dialtone and they ride off as a pack to her house. A group of flying dinosaur-esque creatures circle above them as they arrive to the house. Inside, they find Alice Coyle, Mac's stepmom. She stumbles and is drunk as she tells them Mac's father disappeared in thin air as soon as the creatures arrived. She then pulls out a gun and tells them the Lord has come to make this the end of the world. Mac dives to stop her mother as a gunshot is fired off. The paper girls watch in horror.[2]

Erin found she had been shot and needed to be rushed to the hospital. When they turned to Alice to drive, she had mysteriously disappeared like many of the other residents. Tiffany offered to drive and they hopped in. Mac argued they should bring the gun but dropped it when Erin, who had been shot, requested it to stay behind. On the drive to the hospital they were confronted by a mysterious stranger. Tiffany got out to let the man know that they needed to get Erin help and move out of the way. When he appeared hostile, KJ got out with the gun and revealed she had brought the gun. However, the stranger soon had his head blown off by the ninja teenagers that stole their walkie-talkie. They removed their masks to reveal they were mutated and informed the girls that man wouldn't have helped them.[3]

They decided to return to that last place the Time Machine had been. Upon returning, they found Erin as she emerged from the machine. Erin informed them the teenagers saved her life and died in a gas leak. However, the Grandfather arrived outside the building and announced they should come out side to talk with him. He claimed everything the teenagers had told them had been a lie.[5]