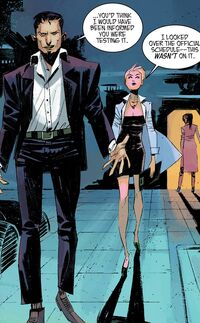 Kadir is the Executive Manager of the Pillar Project. Kadir remains a boardroom attendant more than a scientists and believes in self-preservation.

Kadir went to school with Grant and was known for taking the credit of others. He sabotaged the Pillar, always does in all the dimensions,[1] and ended up getting caught in the jump when he saw Grant's kids were also in the room when it was set to go off.

They found themselves on a planet with mechanized indians at war.[2] When they set off to find a healer, they found themselves surrounded by Indians. In order to save them, several of the dimensionauts attempted to make a last stand. Rather than fight and die, Kadir took off and sacrificed Ward in the process to make the jump to safety.[3]

The crew began to mistrust Kadir. While at ends with Grant, Kadir ended up assisting in Grant’d death with Grant being crushed under a Pillar due to a fight. While Grant died, Kadir promised to protect Grant's children. Finding a new drive in the promise of a man’s dying wish, Kadir will stop at nothing to protect Grant’s children.[4]

All along Kadir wanted Grant's wife Sara. He hired Grant to work on Pillar to see him fail which he had wanted to drive Sara back into his arms.[5]

As the crew teleported to the 5th dimension, Kadir soon found himself pursued by Ward, aka Tacitus from the 5th dimension.[6] He was blamed for spreading the virus but was able to break free from Ward. He returned to the Pillar to find Rebecca had sabotaged the device to selfishly save her dead twin brother. When Grant returned to the camp and found Kadir attacking Rebecca, he was tackled and stabbed by his own sword as the Pillar made it's final jump.[7]

In a Middle East land, Grant III tracked down Kadir III who attempted to give Blokk III the key to the Pillar. He asked Blokk III for the thing he always wanted, Sara III. They were interupted when Grant III broke in and stole the Pillar to escape their dimension and stop Grant II and Sara II from repeating time.[5]

In the fifth dimension, the Dimensionauts brought back with them a world destroying virus that murdered near everyone on the planet. Kadir was known as Krotos on this world and Ward, known as Tacitus, blamed him for the virus spreading. He was soon submitted to the inquisitions to be put on trial for his actions.[7]

Retrieved from "https://imagecomics.fandom.com/wiki/Kadir_(Black_Science)?oldid=65091"
Community content is available under CC-BY-SA unless otherwise noted.