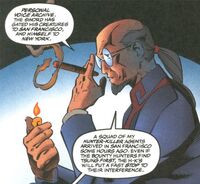 John Colt, member of Team One, started to feel a corruption within himself and asked his friend, Lord Majestros to kill him before this corruption could take him over. Majestros obliged, but not before Lord Emp transferred Colt's personality to a prototype Spartan. Colt's body was left for dead, but regenerated.

The regenerated body of Yohn Kohl became completely corrupt. He captured the real Kaizen Gamorra and took his place.

When Kaizen and Miles Craven orchestrated the substraction of the Gen-factor from former Team 7 members, the WildC.A.T.s followed their former member Grifter to the island of Gamorra[1], where Spartan met Kaizen Gamorra. Kaizen's presence awoke Kohl's memories in Spartan and the two battled. Mister Majestic appeared and destroyed Kaizen, this time for good.[2]

Despite never becoming Kaizen in the Wild.C.A.T.s animated series, Spartan's vacant body makes an appearance in the second episode, stored in stasis. The SNES game has the body being possessed by a Daemonite and facing Spartan, being the closest to the Spartan vs Kaizen duel in other media.

Retrieved from "https://imagecomics.fandom.com/wiki/Kaizen_Gamorra_(Colt)_(Wildstorm_Universe)?oldid=68518"
Community content is available under CC-BY-SA unless otherwise noted.