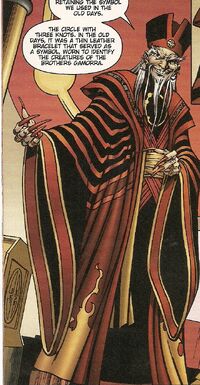 After the man who supplanted Kaizen Gamorra was exposed and killed, the real one made his presence known. He organized a terrorist attack that caused a plane crash, killing 233 people and causing more death due to the release of a chemical agent. Weatherman retaliated by sending Rose Tattoo to kill exactly 233 Gamorrans.[1]

Two years later, Kaizen Gamorra revealed to his troops his plans to announce his return to the world by cutting three knots upon the Earth. He first sends his superhuman clone soldiers to Moscow, where they destroy large chunks of it, as well as killing several hundreds of people, and two more targets are to follow. He sends his soldiers out to attack the second target, London, but once there, they face The Authority.[2]

On Gamorra Island, the wounded attackers pile in. Kaizen decides to draw his force field, the Curtains, over his country.[3]

Jack Hawksmoor and the Engineer discover Kaizen Gamorra's plan. Kaizen is planning to cut his family's symbol, a circle with three knots, onto the planet. The first knot was Moscow, the second was London, and the third is to be Los Angeles. On Gamorra Island, Kaizen Gamorra is confronted by Shinya Hoshino, a negotiator for the United Nations. He laughs at Shinya, and at the United Nations hypocrisy of blaming Gamorra for innocent death when Henry Bendix killed over two hundred innocent Gamorran citizens.[4]

The Midnighter discovers that Kaizen has some kind of Genetic Reactor that is pumping out superhumans at an exponential rate. He doesn't know how to destroy it, until after a short conversation with Kaizen Gamorra himself. He returns to the Carrier, and rams it right into Gamorra's tower. The tower is destroyed, along with the Reactor inside. Presumably, Kaizen perished as well, although nothing is certain.[5]

Retrieved from "https://imagecomics.fandom.com/wiki/Kaizen_Gamorra_(real)_(Wildstorm_Universe)?oldid=68589"
Community content is available under CC-BY-SA unless otherwise noted.