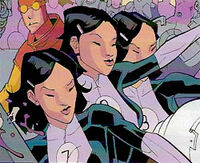 Dupli-Kate's power is mystical in origin. The result of an ancient Chinese curse by the Emperor against his usurper, the Warlord Fung Cha, moments before his death. The curse was: "The seventh generation after Cha's seventh grandchild would be burdened with a family too large to care for... and it would drive him mad."

Hundreds of years later and the appointed grandchild would be Tsing Cha. His wife would give birth to Paul and Kate. Her mother died in childbirth, leaving Tsing to take care of the duo. The toddlers would multiply and cause Tsing to lose his sanity. Kate and Paul would become foster children and be examined to find out the source of their powers. The scientists would not be able to find them. However, when the duo grew up to adolescence, they learned to better control their powers and fought crime together.

Not much long after she started her crime-fighting debut, she would join the Teen Team along with Robot, Rex Sloan, and Samantha Eve Wilkins. She would cheat with Rex on Atom Eve, and later Robot would disband the Teen Team. She, Rex, and Robot later joined the Guardians of the Globe when the original members all perished.

After touching a white light, Mark was transported back in time. He found himself in his body before he received his powers and with all his memories.[1]

Atom was soon approached by Mark at school. He asked her about the Teen Team. She hadn't met him before and was shocked he knew about her secret identity and super-powered team. She dragged him to meet with the Rex, Robot, and Kate. They were all in disbelief that he knew so much about them yet they had never met him before. Over the next week, he told them how to defeat all their future battles with David Hiles, the invading Flaxans, and Maulers.[1]

Retrieved from "https://imagecomics.fandom.com/wiki/Kate_Cha?oldid=63682"
Community content is available under CC-BY-SA unless otherwise noted.