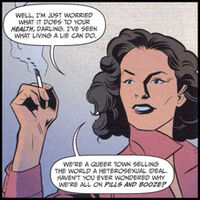 Katharine Hepburn was a motion picture actress who was friends with Richard Conrad, who was also the superhero known as Blue Bolt. Also Kate, who believed that regardless of the lavender marriages in Hollywood during that time, Richard, by virtue of risking his life for others every day, should not have to hide his homosexuality.

Kate also introduced Richard to Frank, another gay man, and the two began a torrid love affair, which was discovered by F.B.I. Director, J. Edgar Hoover.

Retrieved from "https://imagecomics.fandom.com/wiki/Katharine_Hepburn_(Jupiter%27s_Legacy)?oldid=60823"
Community content is available under CC-BY-SA unless otherwise noted.