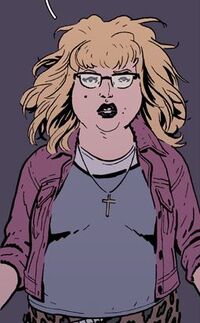 Kelly Grogda is a female assassin at the King's Dominion Atelier of the Deadly Arts. She is considered unattractive by her classmates and is called The Troll behind her back.

She attended a party where Shabnam was secretly planning to pick her up. Marcus got too high on drugs and ended up sleeping with her instead.[1]

Days later, she surprised Marcus and Shabnam by stopping by their apartment. She announced she was pregnant and hadn't slept with anyone besides Marcus. Marcus called her a liar and left her with Shabnam as he was busy dealing with his own personal drama.[2]

Master Lin soon declared finals were to kill all the rats, those that had disobeyed the rules of the school. Shabnam quickly made his move and teamed up with several students who were not rats, including Kelly. He became the mastermind to hunt down the rats, specifically wanting Marcus dead. Kelly agreed to do whatever he wanted as she wanted revenge on Marcus as well.[3]

Retrieved from "https://imagecomics.fandom.com/wiki/Kelly_Grogda_(Deadly_Class)?oldid=53535"
Community content is available under CC-BY-SA unless otherwise noted.