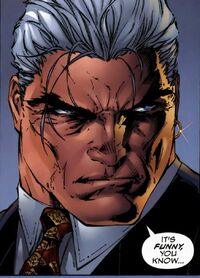 Kenneth Irons was born sometime in the early 12th century. He would become a Templar Knight and drink from the Holy Grail, granting him immortality. Kenneth would encounter many wielders of the Witchblade over the centuries and soon would acquire it for himself, hoping to be its first male host.

Retrieved from "https://imagecomics.fandom.com/wiki/Kenneth_Irons_(Top_Cow)?oldid=67116"
Community content is available under CC-BY-SA unless otherwise noted.