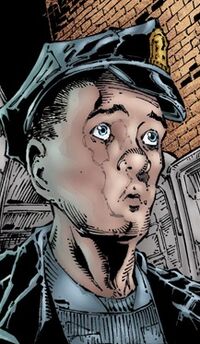 Kenny Osbourne was a new member of the 29th precinct when responding to an EMT call. A young, attractive, woman named Gretchen Culver had been struck by a vehicle and was barely conscious when he and his Sergeant Doug Halliday responded. Osborne was pressured into an initiation of raping Gretchen Culver.[1]

Later, Osborne agreed to confess to Sam Burke and Twitch Williams. As he was escorted out of the PI Office he was gunned down by the Sergeant from an unmarked Sedan.[2]

Retrieved from "https://imagecomics.fandom.com/wiki/Kenny_Osbourne?oldid=31335"
Community content is available under CC-BY-SA unless otherwise noted.