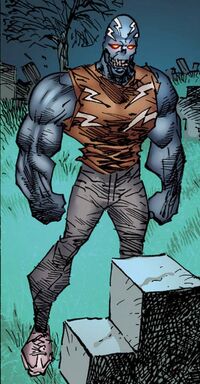 Kevin is the son of Skullface and Sharona Jackson and Malcolm Dragon half-brother. He was drafted into the Vicious Circle in an effort to resurrect his father but their plan went wrong and they accidentally resurrected The Claw. Kevin in the end saw the errors of his way and betrayed The Claw by alerting the military about his plans and aiding his half-brother in the following battle.

Retrieved from "https://imagecomics.fandom.com/wiki/Kevin_Gorelick?oldid=66551"
Community content is available under CC-BY-SA unless otherwise noted.